1905
Shown here is a man with a water pipe known as a chillum (a water pipe with multiple extensions). The man is wearing a woolen cap and a brightly striped robe. The pipe is well maintained and has bronze fittings and colors similar to the robe. In the background is the massive lower wall of the Shir Dar Madrasah, the second of three religious schools on Registan Square. Built in 1619–36, it remains one of the most lavishly decorated monuments in Central Asia. This view shows carved white marble blocks set in masonry, above which are receding rows of a “stalactite” cornice line. At the top is a carved Perso-Arabic inscription. The image is by Russian photographer Sergei Mikhailovich Prokudin-Gorskii (1863–1944), who used a special color photography process to create a visual record of the Russian Empire in the early 20th century. Some of Prokudin-Gorskii’s photographs date from about 1905, but the bulk of his work is from between 1909 and 1915, when, with the support of Tsar Nicholas II and the Ministry of Transportation, he undertook extended trips through many different parts of the empire. He was interested in recently acquired territories of the Russian Empire such as Turkestan (present-day Uzbekistan and neighboring states), which he visited on a number of occasions, including a trip from February to April 1911. Turkestan appealed to him not only for its Islamic architecture but also for scenes from everyday life in cities such as Samarkand. 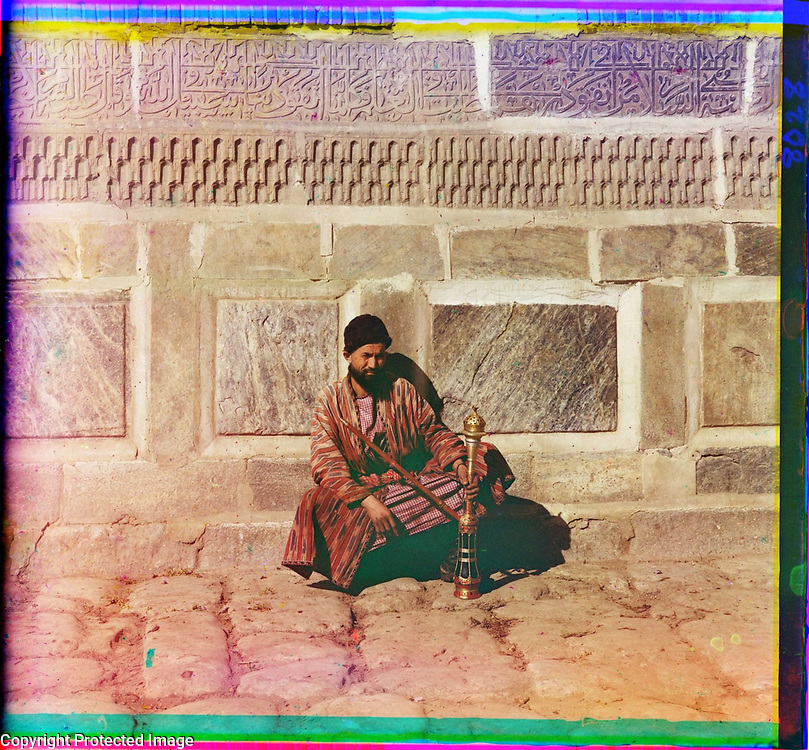