1905
Located on an ancient burial ground on the outskirts of Samarkand, Shah-i Zindah (Persian for “living king”) is revered as a memorial to Kusam-ibn-Abbas, a cousin of the Prophet Muhammad. The patron of this mausoleum, built around 1380, is unknown; therefore, it is referred to by the name of its master builder, Usto Ali Nesefi. Despite severe losses to the main facade, surviving ornamentation reveals one of the most elaborate decorative programs in the entire necropolis. The ceramic work includes polychrome majolica tiles in geometric patterns, faience panels, and Arabic script. These forms are framed by interlocking bands of intricate design. The arched entrance niche is flanked by carved terra-cotta columns. The side of the structure displays geometric patterns with block Kufic script. The image is by Russian photographer Sergei Mikhailovich Prokudin-Gorskii (1863–1944), who used a special color photography process to create a visual record of the Russian Empire in the early 20th century. Some of Prokudin-Gorskii’s photographs date from about 1905, but the bulk of his work is from between 1909 and 1915, when, with the support of Tsar Nicholas II and the Ministry of Transportation, he undertook extended trips through many different parts of the empire. In 1911 he made two trips to Turkestan (present-day Uzbekistan and neighboring states), where he photographed monuments of Islamic architecture. 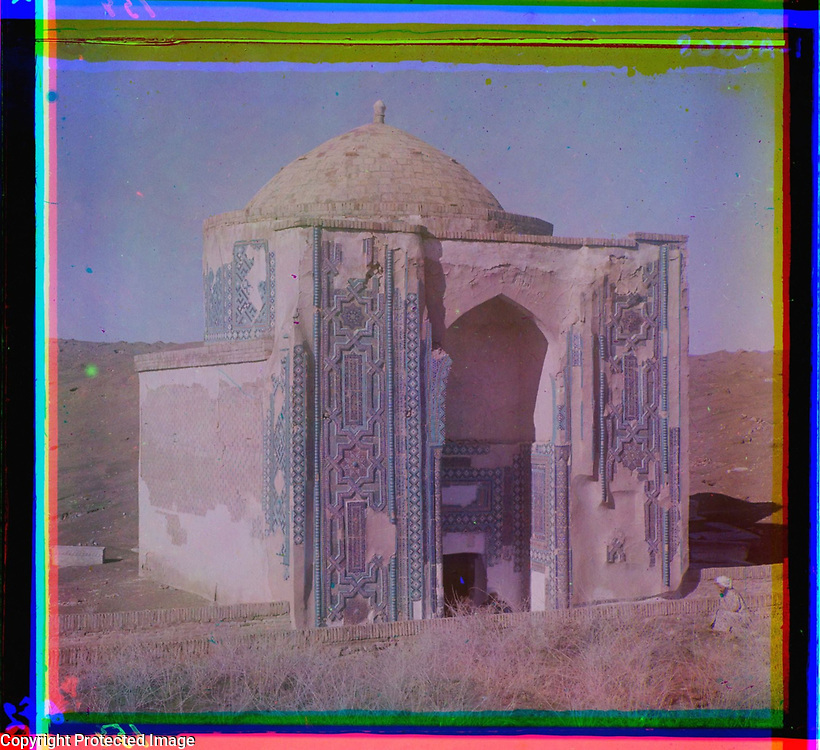