1905
This richly detailed winter photograph shows a courtyard at the complex containing the tomb of Sheikh Bakhauddin Nakshbandi (1318–89), a venerated sage of the Sufi Nakshbandi order. In 1544 Bakhauddin’s burial site at Baha al-Din, near Bukhara (in present-day Uzbekistan), was enshrined within a large khanaka (memorial structure). Mosques and a minaret were added in the 18th and 19th centuries. Seen here is a well covered by a miniature structure with domed columns at the corners. On the facades are remnants of ceramic tiles with star motifs, while the columns display interlocking patterns in carved terra-cotta. In the background is the iwan (porch) of a 19th-century mosque. The wooden columns supporting the roof have complex capitals of several carved segments. The image is by Russian photographer Sergei Mikhailovich Prokudin-Gorskii (1863–1944), who used a special color photography process to create a visual record of the Russian Empire in the early 20th century. Some of Prokudin-Gorskii’s photographs date from about 1905, but the bulk of his work is from between 1909 and 1915, when, with the support of Tsar Nicholas II and the Ministry of Transportation, he undertook extended trips through many different parts of the empire. Prokudin-Gorskii was interested in recently acquired territories of the Russian Empire such as Turkestan, which he visited on a number of occasions, including trips in 1907 and 1911 to the ancient city of Bukhara. 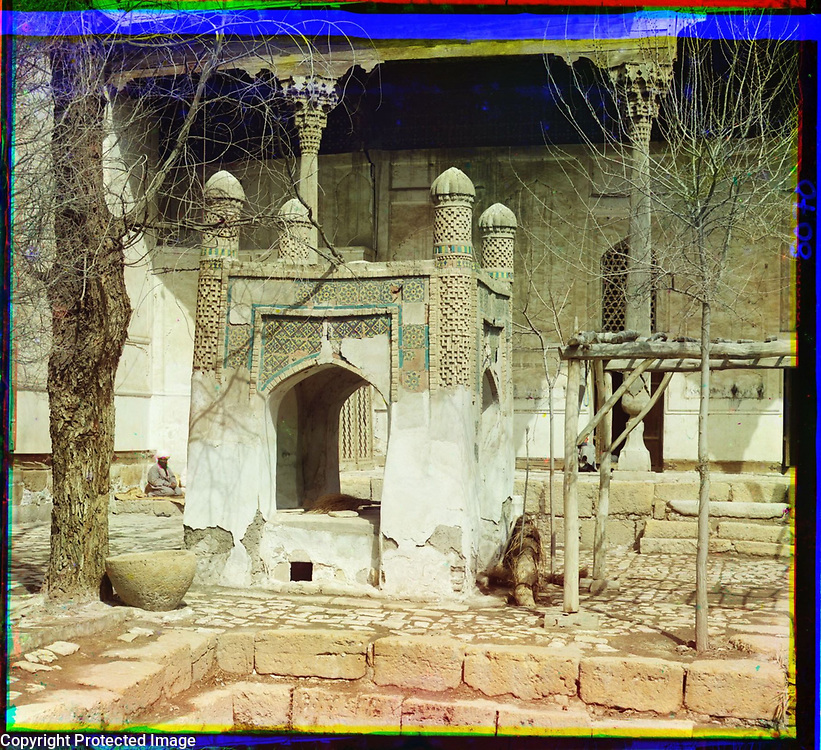