1905
The Astrakhanid dynasty in Bukhara (in present-day Uzbekistan) during the 17th century was adept in its organization of urban space. One example is the Lab-i-Hauz complex, a trading area containing a square reservoir that provided water and served as a reflecting pool for three buildings. Among them is the khanaka, or hostel for pilgrims and travelers, built in 1619–20 by Nadir Divan-Begi, a vizier (high official) and uncle of the Bukhara ruler Imam Kuli Khan. (The madrasah mentioned in the caption is in fact an adjacent structure.) Although severely damaged over time, the facade shows traces of the once-brilliant surface of ceramic tiles that formed elaborate geometric patterns. The structure is flanked by two towers. At the top is a large stork’s nest, with stork clearly visible. The image is by Russian photographer Sergei Mikhailovich Prokudin-Gorskii (1863–1944), who used a special color photography process to create a visual record of the Russian Empire in the early 20th century. Some of Prokudin-Gorskii’s photographs date from about 1905, but the bulk of his work is from between 1909 and 1915, when, with the support of Tsar Nicholas II and the Ministry of Transportation, he undertook extended trips through many different parts of the empire. In 1911 his travels took him to an area of Central Asia then known as Turkestan, where he photographed the ancient monuments of Bukhara. 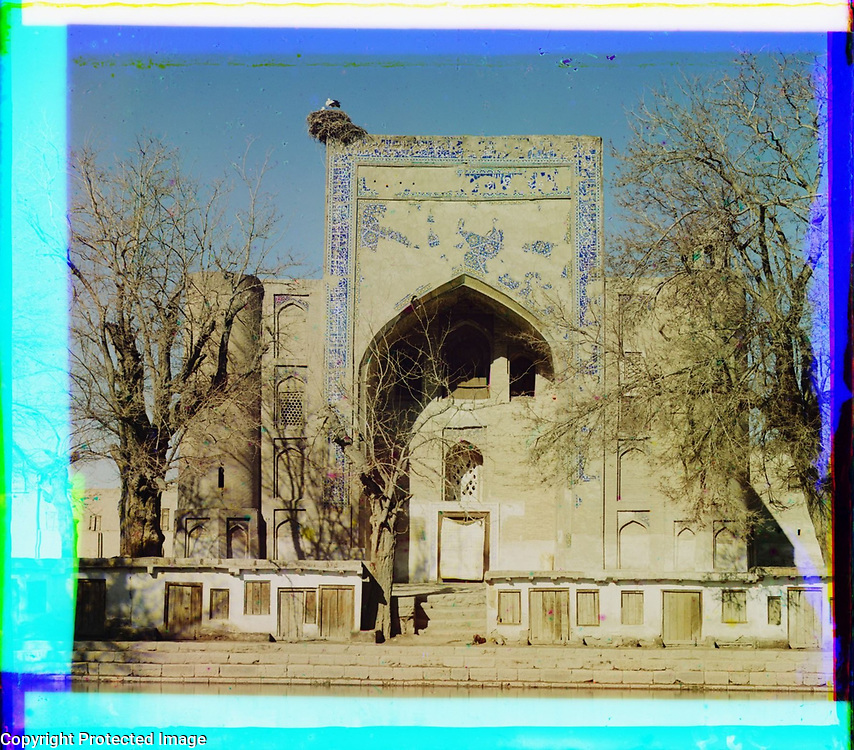