Syr-Darya Oblast. Ruins of Mirza Rabat in the Hungry Steppe

1865
This photograph of the ruins of the Mirza rabat on the Golodnaia (or Hungry) Steppe is from the archeological part of Turkestan Album. The six-volume photographic survey was produced in 1871–72 under the patronage of General Konstantin P. von Kaufman, the first governor-general (1867–82) of Turkestan, as the Russian Empire’s Central Asian territories were called. Located primarily in present-day Uzbekistan and partly in present-day Tajikistan, the Golodnaia Steppe is a semi-arid grassy plain extending southeast from the Kyzyl Kum Desert to the Syr Darya River. The region became a part of the Russian Empire in the late 1860s. The word “rabat” (or ribat) has various interpretations that imply a fortified outpost on pilgrimage or trading routes such as the Silk Road. This remarkable view shows a multi-domed structure similar to a taki, or trading dome, examples of which are still visible in cities such as Bukhara. Even in ruined state, this ancient structure (dating perhaps from the 17th century) impresses with the logic of its design and the quality of its masonry, including pointed entrance arches as well as ribbed vaulting (visible on the left). The domes, constructed of corbelled brick courses, designate separate trading bays on the interior. The exact location of the monument is not known, but it is possible that it was to the northeast of Jizzakh on the route to Tashkent, part of the Silk Road network. The standing figures give an idea of the building’s scale, even though its lower part is covered by layers of soil. 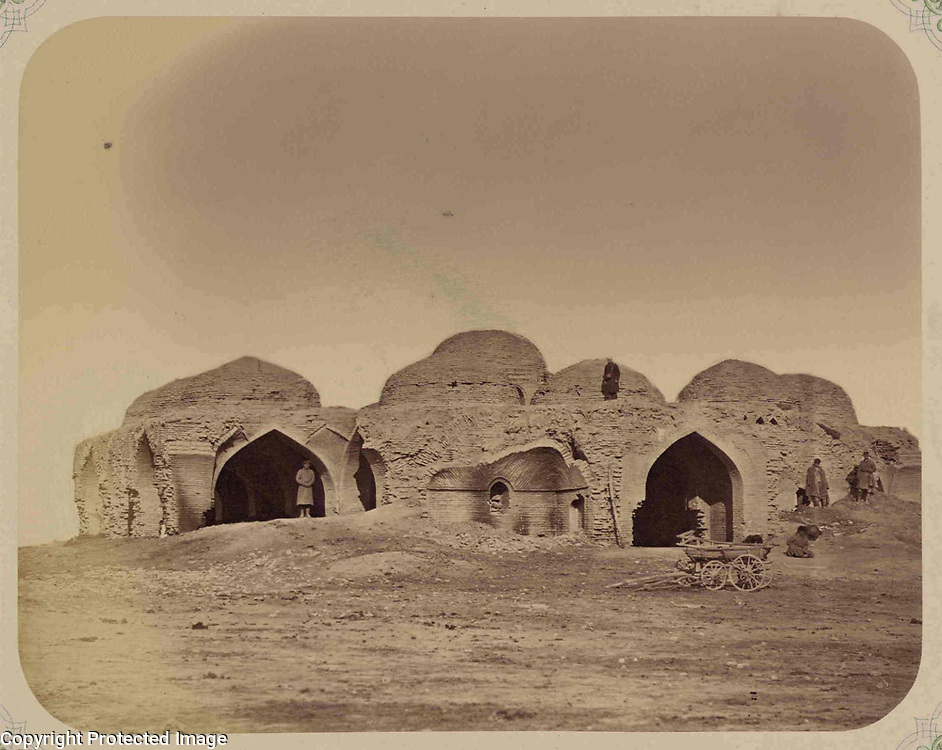