1865
This interior photograph of the mosque at the Kusam-ibn-Abbas memorial ensemble in the northern cluster of shrines at the Shah-i Zindah necropolis in Samarkand is from the archeological part of Turkestan Album. The six-volume photographic survey was produced in 1871-72, under the patronage of General Konstantin P. von Kaufman, the first governor-general (1867-82) of Turkestan, as the Russian Empire's Central Asian territories were called. The album devotes special attention to Samarkand’s Islamic architecture, such as 14th- and 15th-century monuments from the reign of Timur (Tamerlane) and his successors. Shah-i Zindah (Persian for “living king”) is revered as a memorial to Kusam-ibn-Abbas, a cousin of the Prophet Muhammad. This view shows the mihrab (prayer niche that indicates the direction of Mecca) in the west wall of the memorial mosque, or khanaka, which dates from the first half of the 15th century. The mihrab is framed by rich polychrome ceramic work, including decorative strips of carved glazed terracotta and faience panels with floral motifs. Above the arch is a panel with an inscription in the cursive Thuluth style. Thuluth inscriptions related to Kusam-ibn-Abbas also flank the arch in bands that extend to the top. To the right is a worshipper wearing a turban. Beneath the mosque is a chamber, or chillakhona, for a 40-day fast in veneration of the saint. 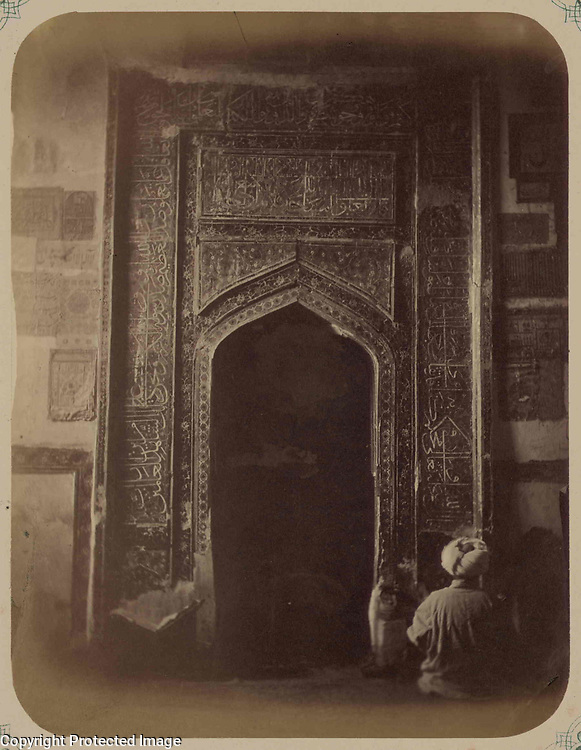