1865
This interior photograph of the mosque at the Kusam-ibn-Abbas memorial ensemble in the northern cluster of shrines at the Shah-i Zindah necropolis in Samarkand is from the archeological part of Turkestan Album. The six-volume photographic survey was produced in 1871-72, under the patronage of General Konstantin P. von Kaufman, the first governor-general (1867-82) of Turkestan, as the Russian Empire's Central Asian territories were called. The album devotes special attention to Samarkand’s Islamic architecture, such as 14th- and 15th-century monuments from the reign of Timur (Tamerlane) and his successors. The Shah-i Zindah (Persian for “living king”) complex is revered as a memorial and pilgrimage site for Kusam-ibn-Abbas, a cousin of the Prophet Muhammad. This view shows a worshipper in front of a wooden rihal (Qurʼan holder) in the largest structure of the ensemble, the memorial mosque, or khanaka, which dates from the first half of the 15th century. The rihal supports a large Qurʼan donated, according to the album caption, by Emir Nasrullah of Bukhara. The walls behind the rihal are partially covered by polychrome ceramic work with a geometric motif formed by intersecting lines that create six-pointed stars. The upper part of the middle wall displays remnants of an inscription. The door to the right leads to other chambers in this mausoleum complex. 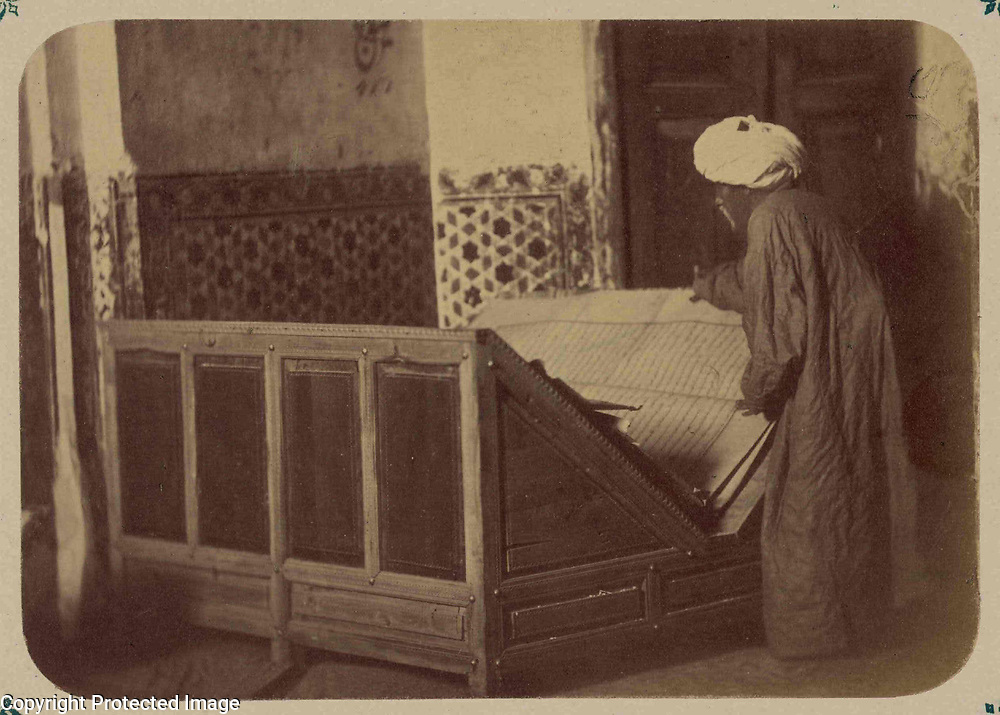