1865
This southeast view of the Emir Burunduk mausoleum in the Shah-i Zindah necropolis in Samarkand is from the archeological part of Turkestan Album. The six-volume photographic survey was produced in 1871-72 under the patronage of General Konstantin P. von Kaufman, the first governor-general, in 1867-82, of Turkestan, as the Russian Empire’s Central Asian territories were called. The album devoted special attention to Samarkand’s Islamic architecture, such as 14th- and 15th-century monuments from the reign of Tamerlane and his successors. Of particular note is Shah-i Zindah (Persian for “living king”), built on the elevated site of an ancient settlement known as Afrosiab and revered as a memorial to Kusam-ibn-Abbas, a cousin of the Prophet Muhammad. The Burunduk mausoleum, built apparently in the 1380s, commemorates one of Tamerlane’s leading military commanders. Here it is viewed from the parapet on the opposite side of the necropolis passageway, and partially obscured by a rubble line. The massive structure suffered major damage: its outer cupola is missing, although the polygonal drum and inner dome have survived, and on the main facade (at right), the top of the entrance arch (peshtak) has collapsed. Still visible are fragments of ceramic work around the portal and within the arch niche. This mausoleum is the first of a cluster of shrines at the north end of the necropolis. 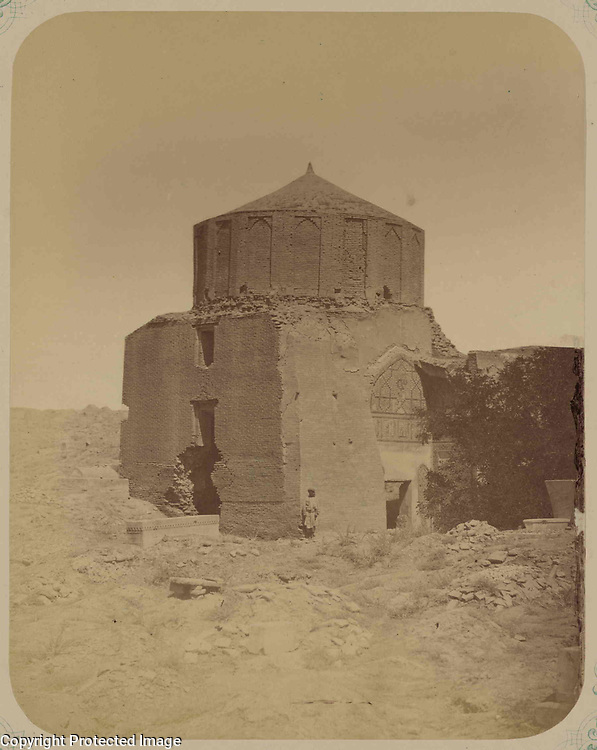