Antiquities of Samarkand. Mausoleum of Chupan-Ata and Bridges of Shadman Malik and Char Minar. Plans, Elevations, and Sections

1865
These plans, sections and elevations of the Chupan-Ata mausoleum and other structures in Samarkand (Uzbekistan) are from the archeological part of Turkestan Album. The six-volume photographic survey was produced in 1871-72 under the patronage of General Konstantin P. von Kaufman, the first governor-general (1867-82) of Turkestan, as the Russian Empire’s Central Asian territories were called. The album devotes special attention to Samarkand’s Islamic architectural heritage. At the top of the plans are an elevation and section of the mid-15th century Chupan-Ata mausoleum (mazar), with plans of the ground level and the base of the dome. The ground plan shows that the mausoleum has a centralized, cruciform design. The section, with masonry walls outlined in red, indicates that the structure has an interior ceiling vault, while the external dome is elevated on a cylinder, or drum. The lower drawings show examples of engineering art, including a bridge and an aqueduct. (In the caption, both structures are referred to as “bridges.”) The name of the Char Minar (“four towers,” or “minarets”) Bridge refers to the two columns at either end. On the lower right are the pointed arch spans of the aqueduct at the Zeravshan River. These superb drawings reflect the dedication of the Russian survey team to the careful, methodical study and recording of local monuments. 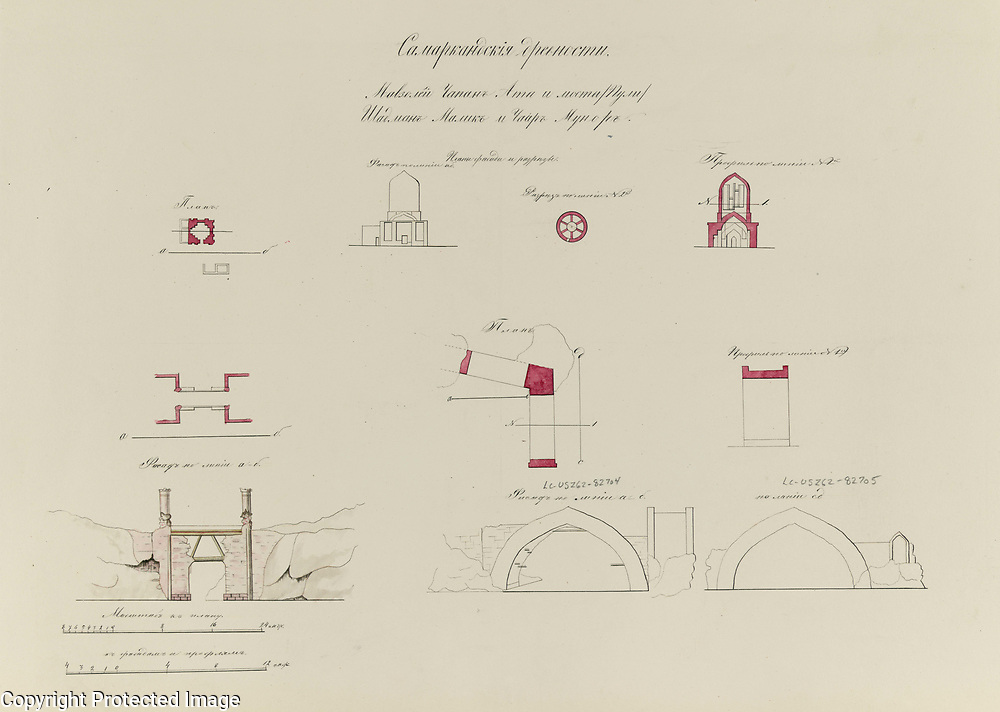