1865
This photograph of the mausoleum of Rabii Sultan Begim in Yasi (present-day Turkestan, Kazakhstan) is from the archeological part of Turkestan Album. The six-volume photographic survey was produced in 1871-72 under the patronage of General Konstantin P. von Kaufman, the first governor-general (1867-82) of Turkestan, as the Russian Empire’s Central Asian territories were called. Yasi is associated with the venerated Sufi mystic, Khodzha Akhmed Iassavi (1103-66), whose great reputation led Timur (Tamerlane) to construct a memorial shrine (khanaka) at his grave site. Rabii Sultan Begim was the daughter of the Timurid ruler Ulugh Beg, and thus the great-granddaughter of Timur (Tamerlane). In 1451 she married Khan Abulkhair. After her death in 1485, this mausoleum was built adjacent to the late 14th-century khanaka dedicated to Khodzha Akhmed Iassavi. This view from the back shows significant damage to the adobe brick structure. The dome is without its original azure tile cladding, and the bottom part of the mausoleum is submerged beneath layers of accumulated soil. Nonetheless, the drum that supports the dome has retained most of its polychrome ceramic tile surface, which is composed of intricate geometric patterns interlaced with elongated Perso-Arabic script. The mausoleum has since been restored. In the background is a wall encompassing the sacred area. 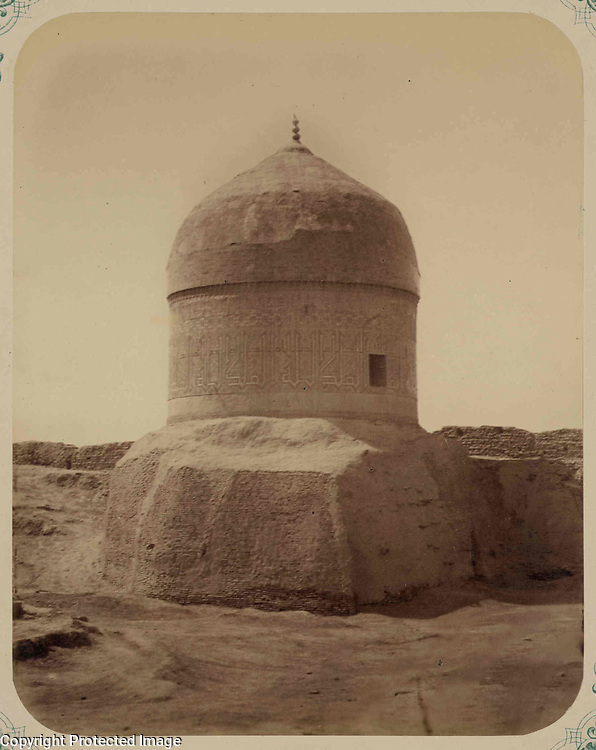