1905
Shown here are two students in Samarkand, probably at the Tillia Kari Madrasah, one of three religious schools bordering Registan Square. Built in 1646–60, Tillia Kari is shaped by a rectangular courtyard bounded by arcades that contained rooms for scholars. The students in this courtyard view are seated on a brick ledge that has been partially cleared of snow. They are wearing white turbans and long-sleeved padded robes against the cold. Both have carefully trimmed beards and moustaches. They gaze intently toward the camera. At the top are remnants of glazed tiles in a geometric pattern that once covered the walls. To the right is the entrance to one of the cells. The image is by Russian photographer Sergei Mikhailovich Prokudin-Gorskii (1863–1944), who used a special color photography process to create a visual record of the Russian Empire in the early 20th century. Some of Prokudin-Gorskii’s photographs date from about 1905, but the bulk of his work is from between 1909 and 1915, when, with the support of Tsar Nicholas II and the Ministry of Transportation, he undertook extended trips through many different parts of the empire. He was interested in recently acquired territories of the Russian Empire such as Turkestan (present-day Uzbekistan and neighboring states), which he visited on a number of occasions, including trips in January 1907 and in early 1911. 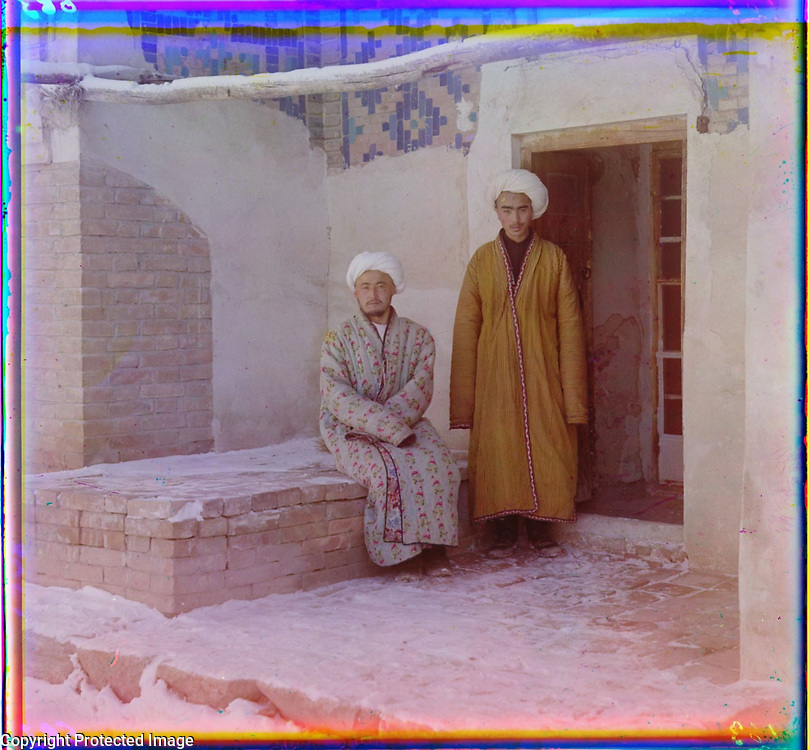