Isfandiyar, Khan of the Russian Protectorate of Khorezm (Khiva), in Uniform, Seated on Chair, Outdoors

1913
This is a 1913 photograph of Asfandiyar-khan (Seid Isfandiyar Tyurya; 1871-1918), penultimate ruler of the Khanate of Khiva. Located largely in what is now Uzbekistan, the Khanate of Khiva existed within the ancient territory of Khwarezm from 1511 to 1920 under various dynasties descended from Genghis Khan. A campaign by General Konstantin von Kaufman in 1872–73 culminated in the conquest of Khiva on May 28, 1873, following which the khanate was granted status as a Russian protectorate. In this portrait, taken in the Winter Garden of the Small Hermitage in Saint Petersburg, the khan wears the colorful silk robe of a Central Asian potentate, with the shoulder boards of a general in the Russian army. Decorations on the robe include the Order of Saint Ann, the Order of Saint Stanislav, and the Order of the White Eagle. The image is by Russian photographer Sergei Mikhailovich Prokudin-Gorskii (1863–1944), who used a special color photography process to create a visual record of the Russian Empire in the early 20th century. Some of Prokudin-Gorskii’s photographs date from about 1905, but the bulk of his work is from between 1909 and 1915, when, with the support of Tsar Nicholas II and the Ministry of Transportation, he undertook extended trips through many different parts of the empire. Prokudin-Gorskii was particularly interested in recently acquired territories of the Russian Empire such as Turkestan. He made an earlier portrait of the khan in 1910. 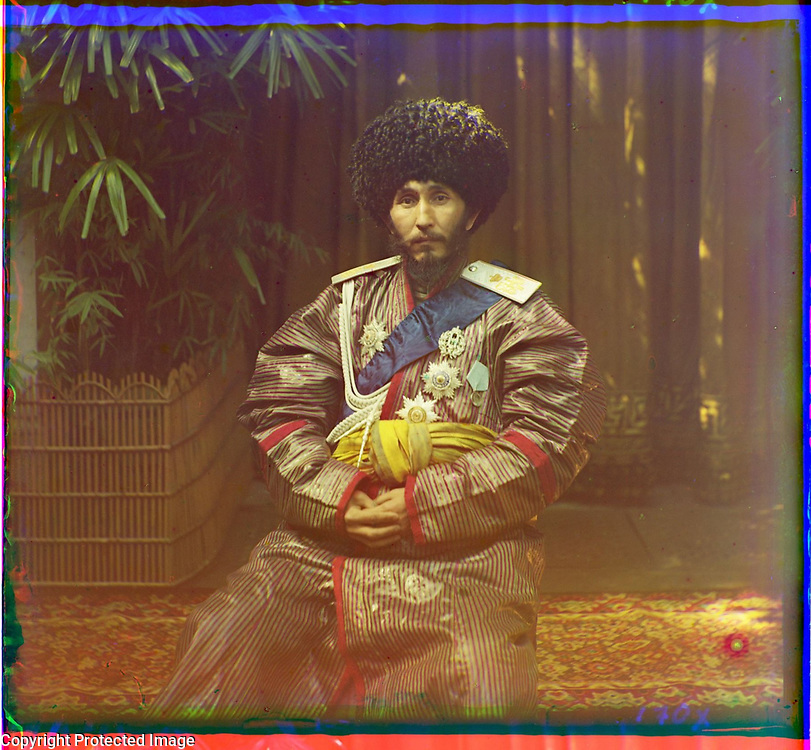