At Work on the Upper Reaches of the Syr-Darya. Golodnaia Steppe

1905
Among the primary initiators of development in Russian Turkestan was Grand Duke Nicholas Constantinovich (1850–1918), grandson of Nicholas I, who moved to Tashkent in 1881. The grand duke sponsored a project to create an area for raising cotton, wheat, and livestock in the Golodnaia Steppe (“Hungry Steppe”) by diverting water from the Syr Darya River. Shown here is a group on an inspection trip along the upper reaches of the river. The man in cap and uniform on the right is probably a state engineer or overseer. The man in the turban could be a contractor for labor among the local Turkic peoples. The prosperous-looking man with long mustache and camelhair coat has the air of a director of one of the enterprises. The primitive wooden cart is padded with hay and pulled by two horses. In the background are high cliffs bordering the river. The image is by Russian photographer Sergei Mikhailovich Prokudin-Gorskii (1863–1944), who used a special color photography process to create a visual record of the Russian Empire in the early 20th century. Some of Prokudin-Gorskii’s photographs date from about 1905, but the bulk of his work is from between 1909 and 1915, when, with the support of Tsar Nicholas II and the Ministry of Transportation, he undertook extended trips through many different parts of the empire. In 1911 his travels took him to an area of Central Asia then known as Turkestan (present-day Uzbekistan and neighboring states), where he photographed traditional culture as well as Russian development projects. 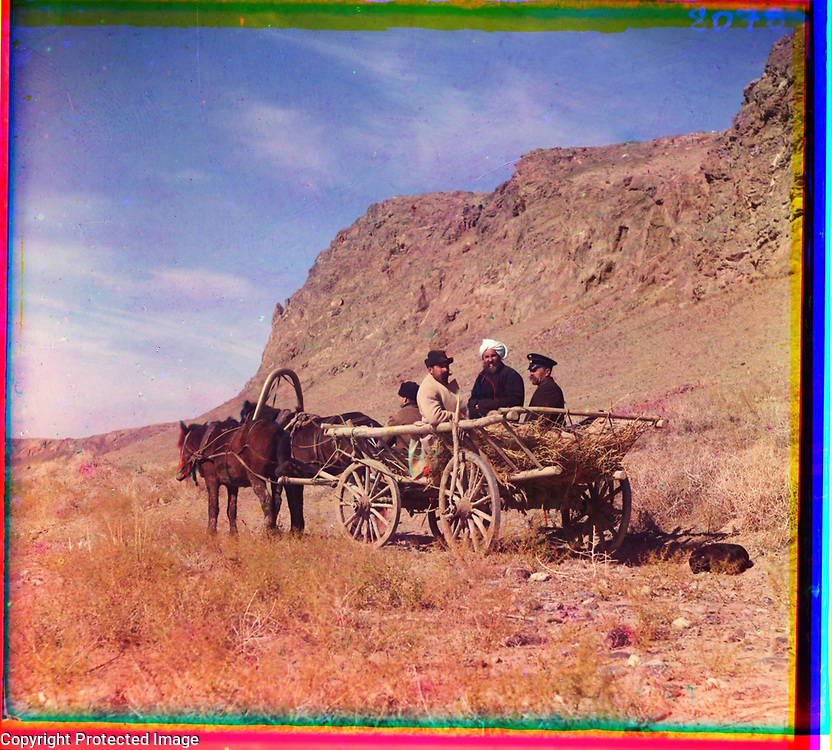