Antiquities of Samarkand. Mausoleum of the Emir Timur Kuragan (Gur-Emir). Inscriptions around the Frieze of the Entire Front

1868
This photograph of the Gur-Emir mausoleum in Samarkand (Uzbekistan) is from the archeological part of Turkestan Album. The six-volume photographic survey was produced in 1871-72 under the patronage of General Konstantin P. von Kaufman, the first governor-general (1867-82) of Turkestan, as the Russian Empire’s Central Asian territories were called. The album devotes special attention to Samarkand’s Islamic architectural heritage, including Gur-Emir (Persian for "tomb of the ruler"). Although known primarily as the burial place of Timur (Tamerlane), Gur-Emir was begun by Timur in 1403 to commemorate the death of his beloved grandson Muhammad Sultan at the age of 27. The shrine was still not complete at the time of Timur's own death in 1405. With his burial, Gur-Emir became the mausoleum of the Timurids. Shown here is a section of the north facade with massive damage to the wall surface. The blind arcade still displays polychrome faience ornamentation at the points of the arches, as well as between and above the arch bays. The ceramic work includes floral and geometric motifs in symmetrical arrangement. Above the arcade are fragments of a monumental Perso-Arabic ceramic inscription band extending for much of the length of the main facade. At the top is a makeshift parapet of narrow brick. Partially visible on the upper left is the drum beneath the central dome. 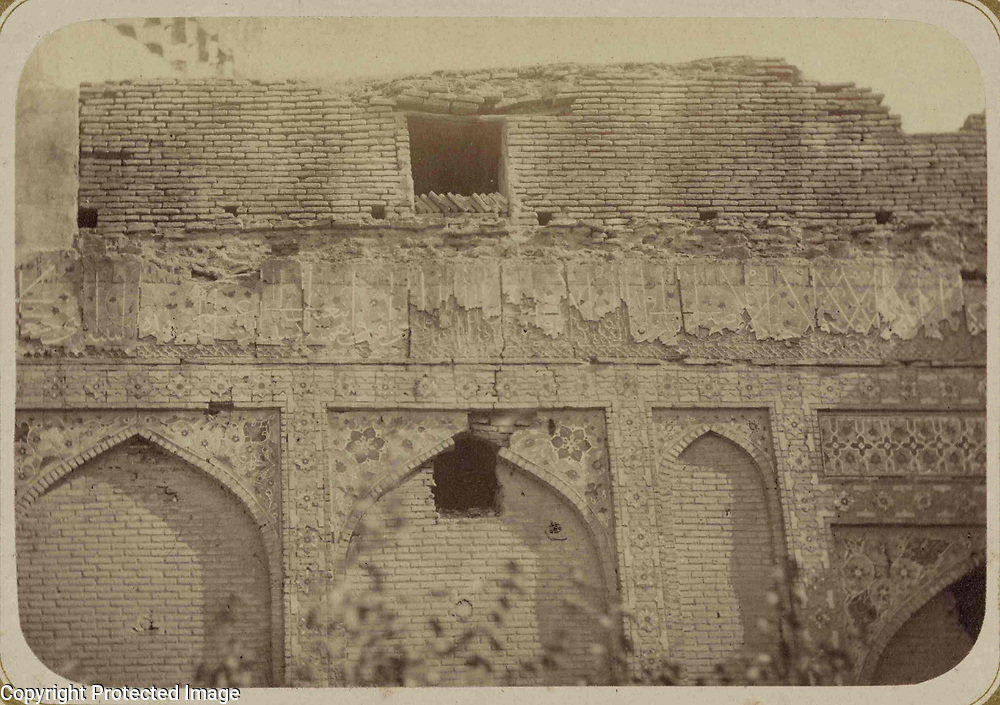