Walled Adobe Structure with Domes and Arches in Desert Area, with Man Posed in Front

1905
Shown here is a memorial shrine dedicated to the burial place of two brothers, Gifarya and Bureyda, who bore the title askhab (close associates of the Prophet Muhammed) in the 7th century. It is located near the ancient city of Merv, now Mary, on the Murghab River (present-day Turkmenistan). The core of the shrine was built in the 15th century and consists of two structures, each of which has a main facade with a peshtak (large pointed arch). The facades were richly decorated with ceramic tiles in geometric and inscriptional patterns. The original complex is fronted with domed structures added in the 19th century. The image is by Russian photographer Sergei Mikhailovich Prokudin-Gorskii (1863–1944), who used a special color photography process to create a visual record of the Russian Empire in the early 20th century. Some of Prokudin-Gorskii’s photographs date from about 1905, but the bulk of his work is from between 1909 and 1915, when, with the support of Tsar Nicholas II and the Ministry of Transportation, he undertook extended trips through many different parts of the empire. Prokudin-Gorskii was particularly interested in architectural and archeological monuments in recently acquired territories of the Russian Empire such as Turkestan (present-day Uzbekistan and neighboring states) in Central Asia, which he visited on a number of occasions, including two trips in 1911. 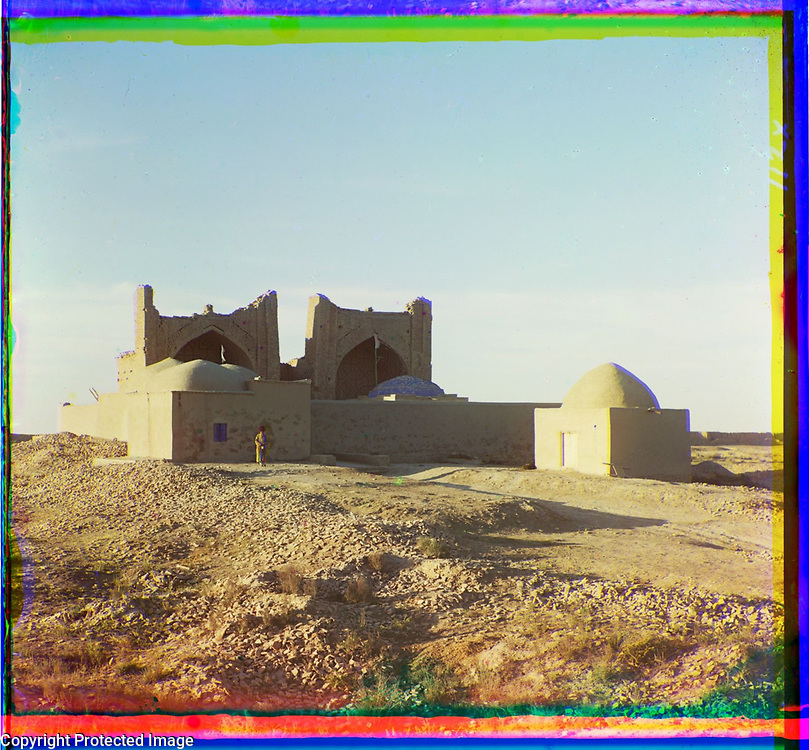