1905
The Shah-i Zindah (Persian for “living king”) necropolis is located at the outskirts of Samarkand. Situated on an ancient burial ground, it is revered as a memorial to Kusam-ibn-Abbas, a cousin of the Prophet Muhammad. Shown here is the portal of the mausoleum of Shadi-Mulk Aga, built in 1372 for the burial of Uldjai Shadi-Mulk, daughter of Tamerlane's elder sister Kutlug-Turkan-aga. The portal is set within a peshtak (entrance arch), the facades of which display a remarkable array of ceramic work, including majolica tiles and rosettes, as well as carved glazed terra-cotta columns. The doorway is framed with a band of Arabic script in the Thuluth (cursive) style. The lintel above the portal contains a glazed relief inscription. The flanking sides of the peshtak display intricate geometric patterns. The image is by Russian photographer Sergei Mikhailovich Prokudin-Gorskii (1863–1944), who used a special color photography process to create a visual record of the Russian Empire in the early 20th century. Some of Prokudin-Gorskii’s photographs date from about 1905, but the bulk of his work is from between 1909 and 1915, when, with the support of Tsar Nicholas II and the Ministry of Transportation, he undertook extended trips through many different parts of the empire. In 1911 his travels took him to Samarkand (present-day Uzbekistan), where he devoted special attention to monuments of Islamic architecture. 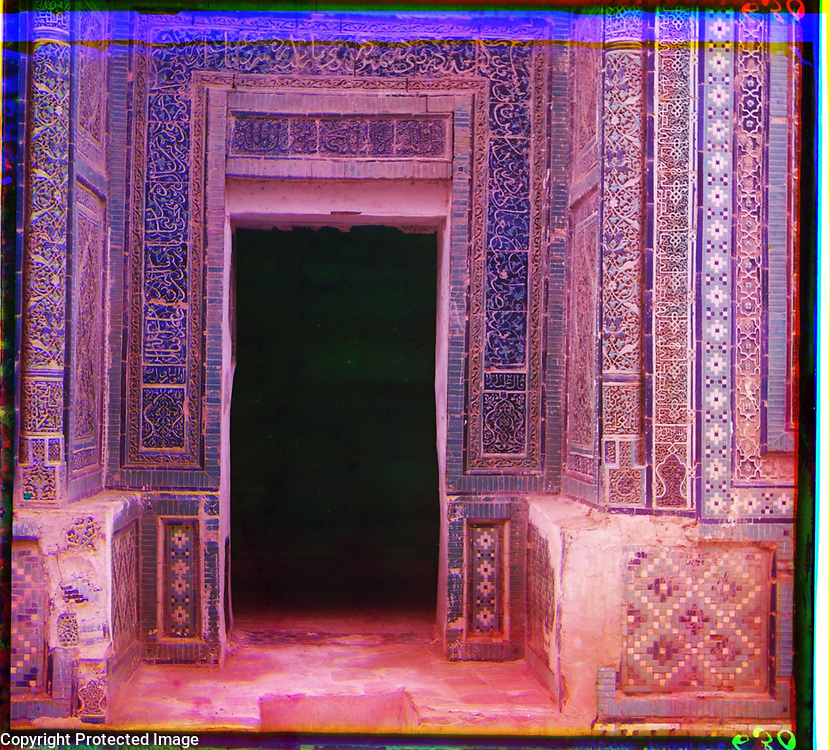