1865
This photograph of the mausoleum of Sheikhantaur in Tashkent (present-day Uzbekistan) is from the archeological part of Turkestan Album. The six-volume photographic survey was produced in 1871–72 under the patronage of General Konstantin P. von Kaufman, the first governor-general (1867–82) of Turkestan, as the Russian Empire’s Central Asian territories were called. Sheikhantaur (the accepted short form for Sheikh Khovendi at-Takhura) was born in the late 13th century in Bogustan (or Bogiston), a village in the hills near Tashkent. A son of the sage Sheikh Omar, he adhered to the mystical tradition of Sufism and became one of the most esteemed holy men in Ma Wara'un-Nahr (or Mawarannahr, the Arab name for Transoxiana). After his death (circa 1355-60), a shrine was created within a mausoleum (mazar), which became the center of a major burial complex in Tashkent. Rebuilt several times, the mausoleum assumed the form shown here apparently toward the end of the 18th century. The main entrance was framed by a pointed arch whose facade displayed ceramic ornamentation. At the center of the structure is a polygonal drum and dome over the ziaratkhana (memorial prayer hall). A lower dome, just visible at the back, rises over the gurkhona (the chamber of the tomb). An unusual feature at the site is the presence of petrified forms of a tree known as saura (visible in foreground). Legend places the origin of the trees to the time of Alexander the Great, who conquered the region in the late 4th century BC. 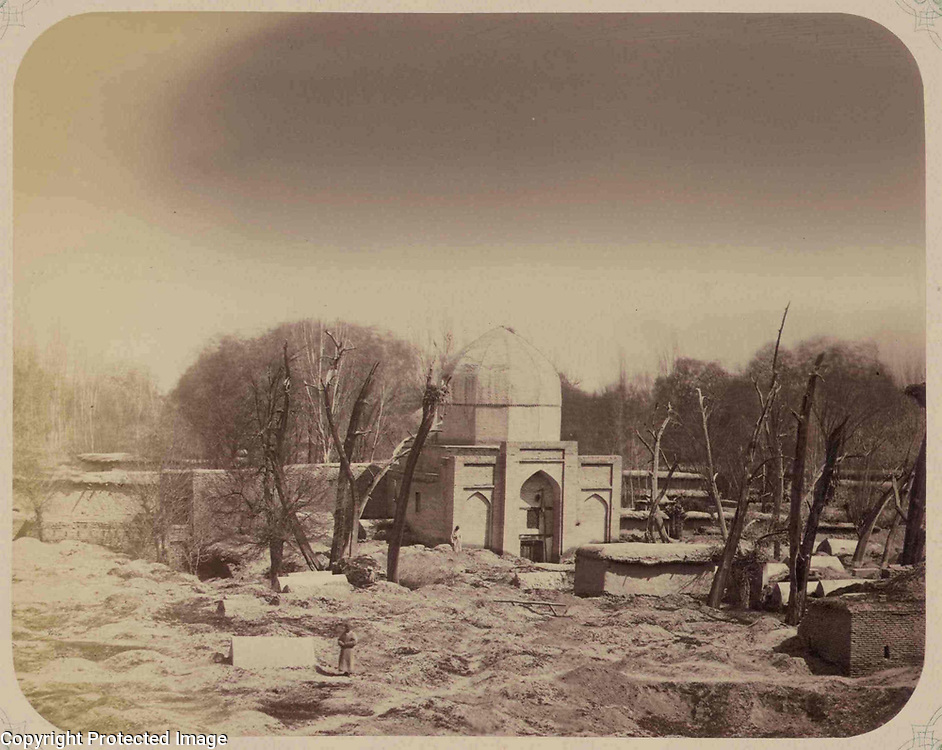