1865
This view of mausoleums at the Shah-i Zindah necropolis in Samarkand is from the archeological part of Turkestan Album. The six-volume photographic survey was produced in 1871-72 under the patronage of General Konstantin P. von Kaufman, the first governor-general, in 1867-82, of Turkestan, as the Russian Empire’s Central Asian territories were called. The primary compilers for the visual material were Aleksandr L. Kun, an Orientalist attached to the army, and Nikolai V. Bogaevskii, a military engineer. They devoted special attention to Samarkand’s Islamic architecture, such as 14th- and 15th-century monuments from the reign of Tamerlane and his successors (the Timurids). Built on an ancient burial ground, Shah-i Zindah (Persian for “living king”) is revered as a memorial to Kusam-ibn-Abbas, a cousin of the Prophet Muhammad. The two mausoleums shown here are at the top of a stairway from the main entrance. The view is taken facing south within the narrow upper passageway of the necropolis. On the left is the Mausoleum of Emir-Zade (1386), followed by the Mausoleum of Shadi Mulk Aga (niece of Tamerlane), also known as Turkan-Aka (1372). Although their intricate ceramic tile decoration (including patterned Arabic script) was relatively well preserved, significant losses are evident above the Emir-Zade arch. In the left background is the double-domed mausoleum. 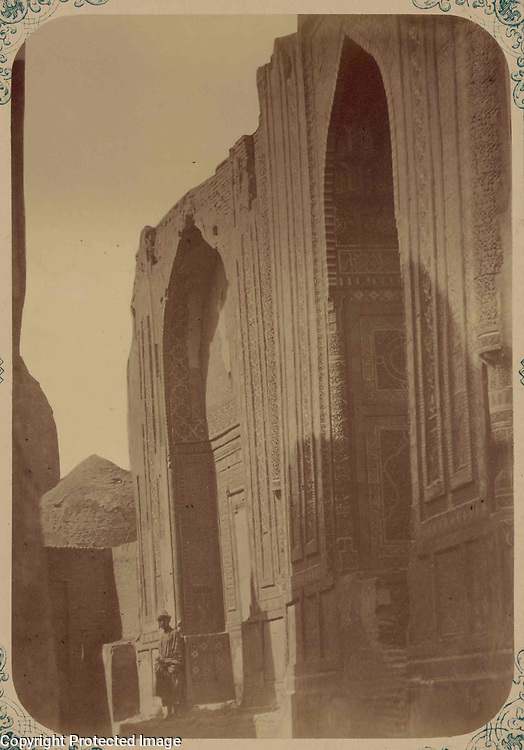