Three Mannequins of Women in Elaborate Dresses, on Wooden Stands

1910
The Tver Museum, located in the region of Tver, an ancient city (first mentioned in the historical record in 1135) on the Volga River to the northwest of Moscow, opened in 1866. The museum displayed natural and archeological items of interest from the area, as well as works of art and crafts. Seen here are three mannequins of women in traditional Russian dress with elaborate embroidery and lacework. In the center is an example of a type of sleeveless dress (sarafan), with a brightly patterned cloak. The mannequins wear elaborate headdresses with long veils. In 1897 the museum was allocated space in the Imperial Transit Palace. Most of the museum objects disappeared during the months of German occupation and heavy fighting in this area in World War II. The image is by Russian photographer Sergei Mikhailovich Prokudin-Gorskii (1863–1944), who used a special color photography process to create a visual record of the Russian Empire in the early 20th century. Some of Prokudin-Gorskii’s photographs date from about 1905, but the bulk of his work is from between 1909 and 1915, when, with the support of Tsar Nicholas II and the Ministry of Transportation, he undertook extended trips through many different parts of the empire. Prokudin-Gorskii visited the Tver Museum in 1910. 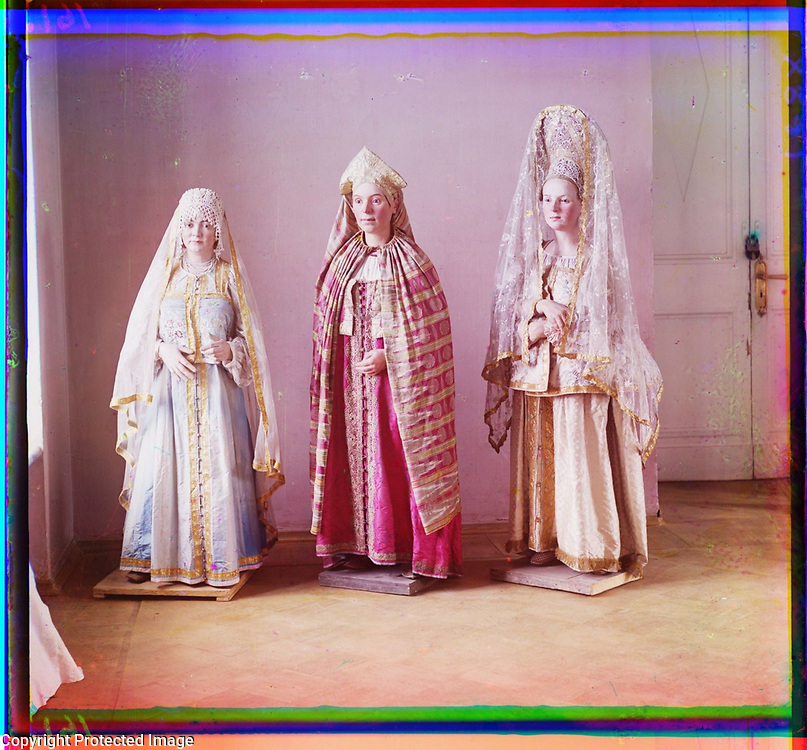