1920
Amir Abdur Rahman's enthusiasm for building palaces never flagged throughout his lifetime. Even when engaged in consolidating his power throughout the country, Amir Abdur Rahman built palaces with great enthusiasm. He designed each one himself while sitting with masons sketching designs with his cane in the sand. Just 3.5 kilometers from Bagh-i-Babur he laid the cornerstone for the Chihlsitoon Palace in 1888 which, according to a marble plaque set into the hillside three years later (1891), he presented to his son and successor, Prince Habibullah.
Perched on a hilltop in a large walled park-like garden of 160 jeribs (64 acres) filled with trees and flower beds, it was a unique one-story rectangular structure bowed on the west end, with arcaded verandahs on the north and south sides. The interior consisted only of an entrance lobby, a long grand saloon lit by three windows on each side, and a bowed room with three large windows overlooking the Chahr Deh Valley. This charming room was furnished with a piano and especially enjoyed when the Amir came to dine here and watch displays of fireworks...
Later after Prince Habibullah became Amir in 1901 the palace was frequently used as the State Guest House and was admiringly referred to in the accounts of numbers of guests. In 1893. Sir Mortimer Durand engaged in negotiating the eastern boundary between Afghanistan and British India, writes of his "lordly bed upholstered in gold brocade and blue statin." Almost all commented on the profusion of fresh flowers brought to their rooms daily. Black and white Souvenir postcard printed in Paris in the 1920s. 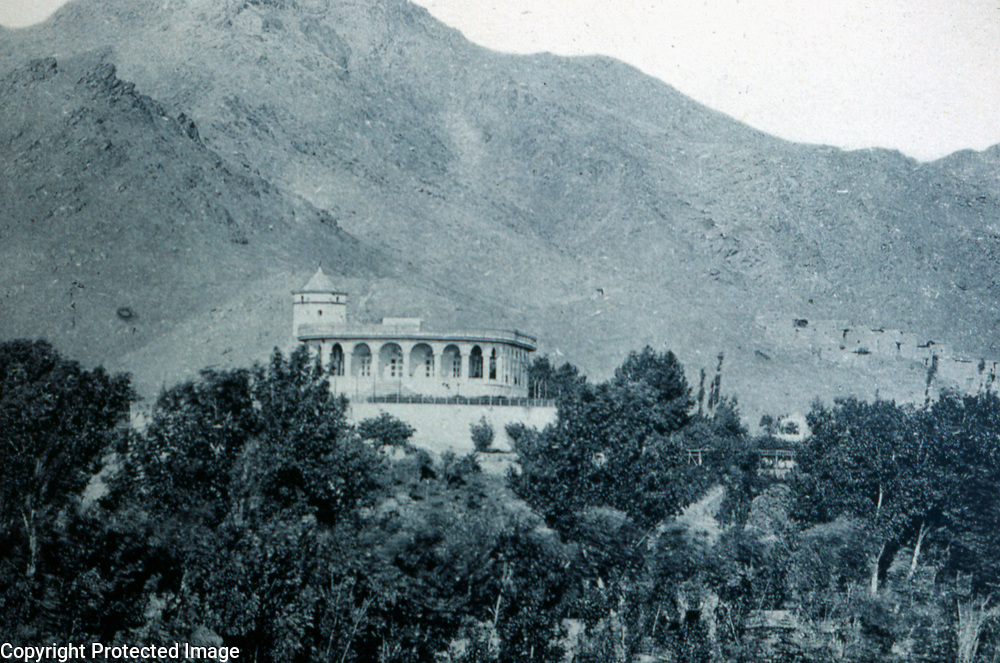