Antiquities of Samarkand. Mosque of Khodzha Akhrar. View toward the Mosque

1868
This photograph of the Khodzha Akhrar shrine in Samarkand (Uzbekistan) is from the archeological part of Turkestan Album. The six-volume photographic survey was produced in 1871-72 under the patronage of General Konstantin P. von Kaufman, the first governor-general (1867-82) of Turkestan, as the Russian Empire’s Central Asian territories were called. The album devotes special attention to Samarkand’s Islamic architectural heritage. Dedicated to the memory of the renowned 15th-century mystic Khodzha Akhrar, the shrine contained several structures, including a winter and a summer mosque, as well as a minaret and a cemetery. The summer mosque, seen in this bosky view, is so called because its pavilion has one side open to the courtyard, with the roof supported by large wooden columns resting on a carved marble base (an example visible on the left). On the sides of this iwan (vaulted hall, walled on three sides, with one end open) are brick walls surfaced with polychrome ceramic work, including faience mosaics. In the center background is the mihrab niche, which shows the direction to Mecca. The mihrab is set within a lavish display that includes a network of ceramic inscription bands in elongated cursive Perso-Arabic script (Thuluth). The open part of the mosque is joined to an enclosed structure (on the right) whose walls are also surfaced with ceramic work in geometric and botanical patterns. The basic color is dark blue. 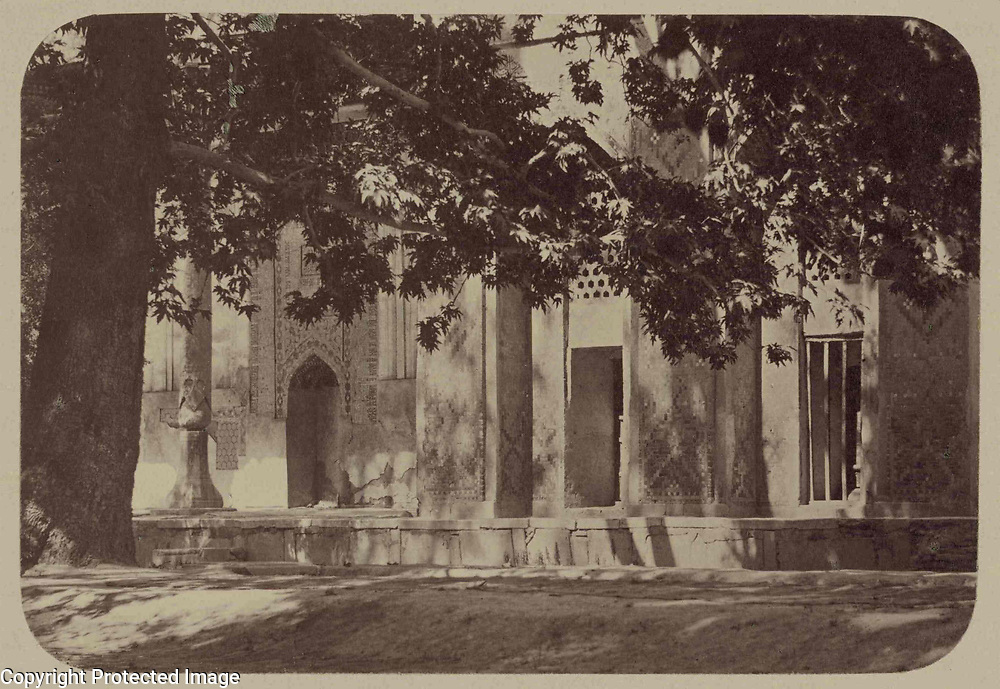