1905
In the center of Samarkand is the Registan complex, consisting of three examples of the madrasah (religious schools). The oldest component is the Ulugh Beg Madrasah, built in 1417–20 by the scholar King Ulugh Beg (1393?–1449; grandson of Timur). Shown here is the main facade with the great iwan arch at the entrance. The facade displays remnants of polychrome ceramic ornamentation, including panels of geometric and botanical motifs, and a vertical Perso-Arabic inscription band. The walls also display monumental geometric tile figures, within which are patterns of block Kufic script that form words from the Kalima, the basis of the Shahada, or Islamic declaration of faith. The image is by Russian photographer Sergei Mikhailovich Prokudin-Gorskii (1863–1944), who used a special color photography process to create a visual record of the Russian Empire in the early 20th century. Some of Prokudin-Gorskii’s photographs date from about 1905, but the bulk of his work is from between 1909 and 1915, when, with the support of Tsar Nicholas II and the Ministry of Transportation, he undertook extended trips through many different parts of the empire. During a trip in 1911 he gave special attention to the Islamic architecture of Samarkand (present-day Uzbekistan), including 14th and 15th-century monuments from the reign of Timur (Tamerlane) and his successors. 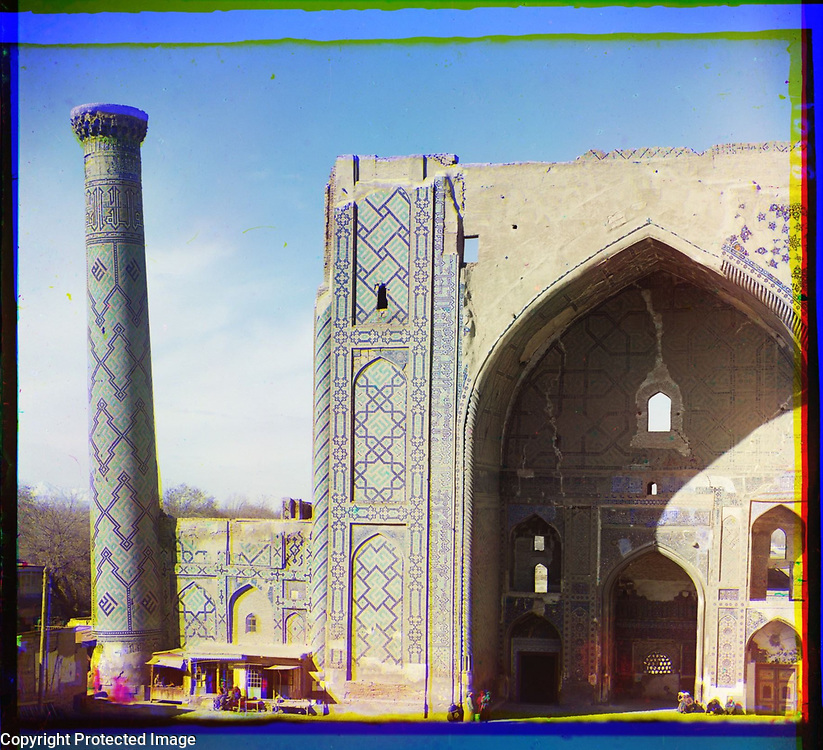