Inside Tillia Kari Courtyard. Detail on Right Side. Samarkand

1905
In the center of Samarkand is the Registan complex, consisting of three madrasah (religious schools). The third of these, the Tillia Kari Madrasah, was built in 1646–60 on the site of a former caravansarai. Its basic plan is formed by a rectangular courtyard, bounded by arcades that contain rooms for scholars. Although much damaged, the facades show profuse ceramic decoration in geometric and botanical motifs, as well as panels with Perso-Arabic inscriptions above the door of each cell. Seen here is a detail of a cell facade inside the courtyard, with the walls covered in a geometric pattern of small glazed tiles and a fragment of an inscription panel above the door. The image is by Russian photographer Sergei Mikhailovich Prokudin-Gorskii (1863–1944), who used a special color photography process to create a visual record of the Russian Empire in the early 20th century. Some of Prokudin-Gorskii’s photographs date from about 1905, but the bulk of his work is from between 1909 and 1915, when, with the support of Tsar Nicholas II and the Ministry of Transportation, he undertook extended trips through many different parts of the empire. Prokudin-Gorskii was particularly interested in recently acquired territories of the Russian Empire such as Turkestan (present-day Uzbekistan and neighboring states), which he visited on a number of occasions. During a trip in 1911 he gave special attention to the Islamic architecture of Samarkand (present-day Uzbekistan). 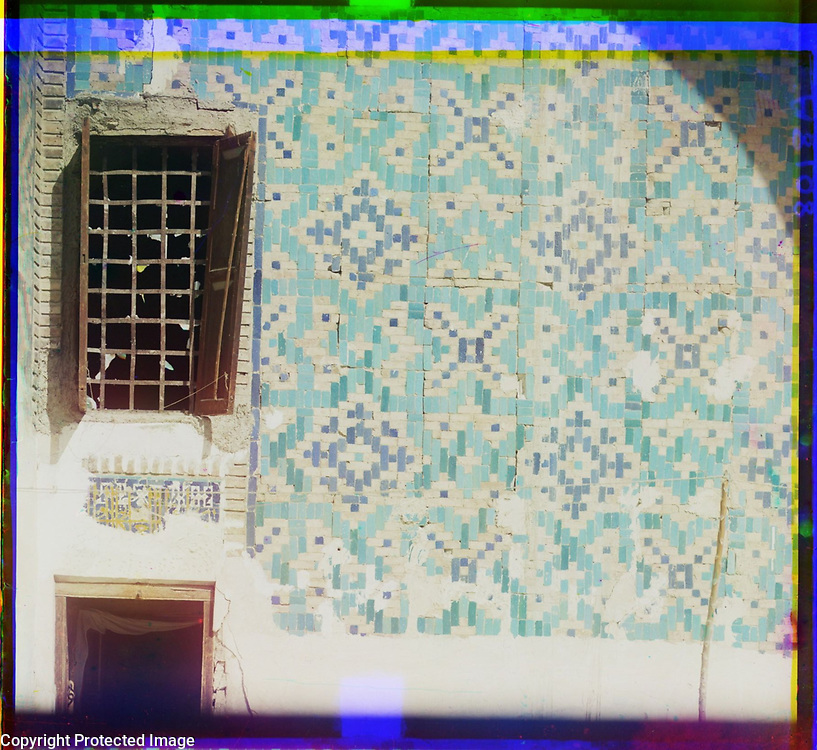