1905
In the late 19th century, the Russian Empire acquired large territories in Central Asia that became known as Russian Turkestan (present-day Uzbekistan and neighboring states). Economic development of the region was closely related to the construction of railroads, such as the Trans-Caspian Railway, begun in 1879 and expanded over the next three decades. An important station was the Russian settlement of Chardjuy (now Turkmenabat), located on the Amu-Darya (Oxus) River and founded in 1886 near the site of an ancient town of the same name. The foreground of this photograph shows a thin ribbon of railroad stretching across salt flats in the semi-arid region near Chardjuy. A permanent rail bridge was completed across the Amu-Darya in 1901. The image is by Russian photographer Sergei Mikhailovich Prokudin-Gorskii (1863–1944), who used a special color photography process to create a visual record of the Russian Empire in the early 20th century. Some of Prokudin-Gorskii’s photographs date from about 1905, but the bulk of his work is from between 1909 and 1915, when, with the support of Tsar Nicholas II and the Ministry of Transportation, he undertook extended trips through many different parts of the empire. Prokudin-Gorskii was particularly interested in recently acquired territories of the Russian Empire such as Turkestan which he visited on a number of occasions, including two trips in 1911. Turkestan appealed to him not only for its rich Islamic culture but also for the transformation brought by Russian settlement, particularly in agriculture. 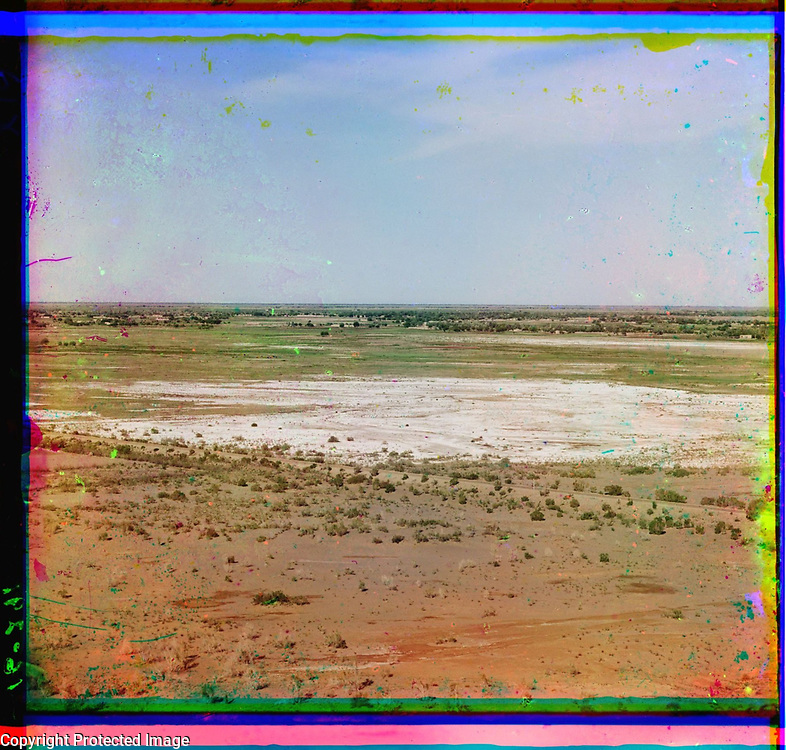