Camel, Loaded with Sacks, Lying in Field of Sacks

1905
In the late 19th century, the Russian Empire acquired large territories in Central Asia that became known as Russian Turkestan (present-day Uzbekistan and neighboring states). Many parts of Turkestan were suitable for raising high quality cotton, and cotton production rapidly became a priority in the Russian development of this area. Camels were the primary beast of burden for heavy work in this hot, arid climate. This scene from the extensive Murgab estate near the town of Bayramaly (present-day Turkmenistan) shows a camel at rest with large sacks of cotton grown on the irrigated fields of the estate. Hundreds of other sacks await delivery to the cotton gin. In the background is a row of plane trees. The image is by Russian photographer Sergei Mikhailovich Prokudin-Gorskii (1863–1944), who used a special color photography process to create a visual record of the Russian Empire in the early 20th century. Some of Prokudin-Gorskii’s photographs date from about 1905, but the bulk of his work is from between 1909 and 1915, when, with the support of Tsar Nicholas II and the Ministry of Transportation, he undertook extended trips through many parts of the empire. Prokudin-Gorskii was particularly interested in recently acquired territories of the Russian Empire such as Turkestan, which he visited on a number of occasions, including two trips in 1911. Turkestan appealed to him not only for its Islamic architecture but also for the transformation brought by Russian settlement. 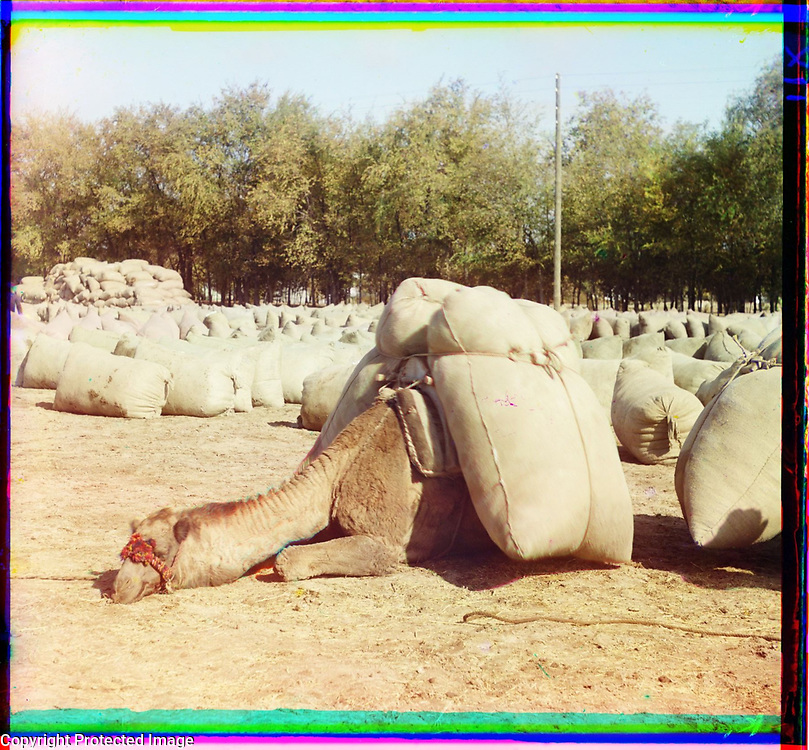