1905
The caption identifies this homestead as belonging to a Sart, a term used in the previous century to refer not only to town dwellers, but also to people who inhabited this area before the coming of Uzbek tribes in the 16th century. Built of stuccoed adobe brick, the main structure reflects Western forms with a simple portico of wooden columns supporting a loggia on the second floor. Attached structures lead into a courtyard, and a long masonry wall encloses a garden on the left. At the entrance to the dwelling stand two women dressed in red robes in the manner of purdah. Another is seated next to them on the step. The image is by Russian photographer Sergei Mikhailovich Prokudin-Gorskii (1863–1944), who used a special color photography process to create a visual record of the Russian Empire in the early 20th century. Some of Prokudin-Gorskii’s photographs date from about 1905, but the bulk of his work is from between 1909 and 1915, when, with the support of Tsar Nicholas II and the Ministry of Transportation, he undertook extended trips through many different parts of the empire. He was interested in recently acquired territories of the Russian Empire such as Turkestan (present-day Uzbekistan and neighboring states), which he visited on a number of occasions, including two trips in 1911. Turkestan appealed to him not only for its Islamic architecture but also for scenes of local life in places such as Samarkand. 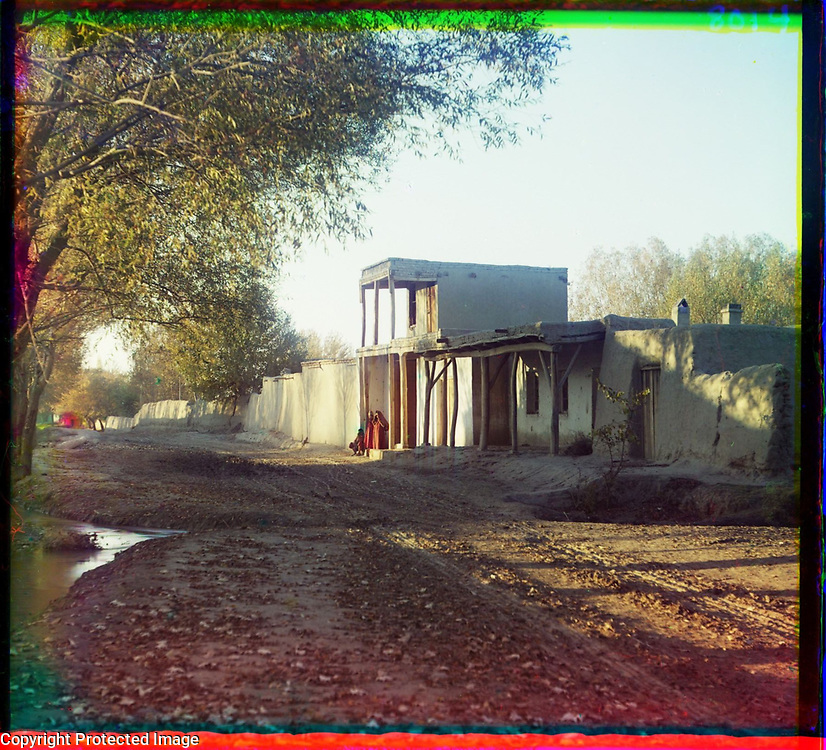