1865
This photograph of the mausoleum of Khodzha Akhmed Iassavi in Yasi (present-day Turkestan, Kazakhstan) is from the archeological part of Turkestan Album. The six-volume photographic survey was produced in 1871-72 under the patronage of General Konstantin P. von Kaufman, the first governor-general (1867-82) of Turkestan, as the Russian Empire’s Central Asian territories were called. Yasi is associated with the Sufi mystic, Khodzha Akhmed Iassavi (1103-66), whose great reputation led Timur (Tamerlane) to construct a memorial shrine (khanaka) at his grave site. Built in 1396-98, the mausoleum displays features of Timurid architecture, then at its height in Samarkand. This view shows the mausoleum’s exterior door, located within the portal niche of the great iwan (vaulted hall, walled on three sides, with one end open) arch. Although damaged, the two halves of the door display wooden panels with well-preserved, luxuriant carving. The central panels are the largest and have the most elaborate design, consisting of intertwined floral arabesques with lotus figures. The bottom panels have a circular design with an intricate eight-pointed star pattern radiating from the center. The upper panels contain geometric motifs with cursive Arabic script. The panels are framed by strips of complex intersecting geometric figures. The remarkable artistry of the door suggests an entrance to paradise. 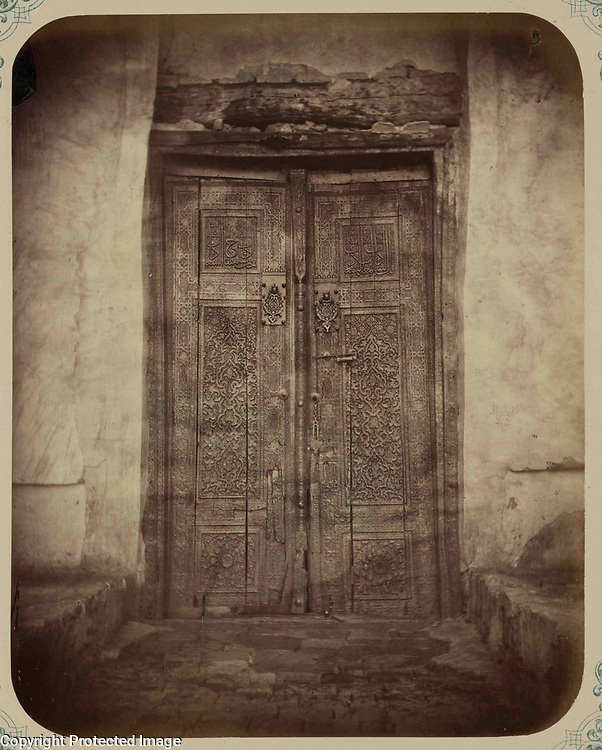