1868
This plan, section and elevation of the Bibi Khanym mausoleum in Samarkand (Uzbekistan) is from the archeological part of Turkestan Album. The six-volume photographic survey was produced in 1871-72 under the patronage of General Konstantin P. von Kaufman, the first governor-general (1867-82) of Turkestan, as the Russian Empire’s Central Asian territories were called. The album devotes special attention to Samarkand’s Islamic architecture, such as 14th- and 15th-century monuments from the reign of Timur (Tamerlane) and his successors. The mausoleum was built at the same time as the nearby main mosque (1399-1405) and like the mosque was named in homage to Timur’s senior wife, Sarai Mulk Khanym (bibi meaning “lady” or “mother”). Indeed, the structure appears originally to have been connected to the mosque by a long passageway. The mausoleum is thought to have served not only as the burial shrine for Sarai Mulk Khanym, but also for other women of the ruling family. The pointed dome rests over a cruciform plan set within an octagonal structure. The brick walls of the mausoleum were richly decorated with patterns of ceramic tiles. As with all monuments in the Bibi Khanym ensemble, the mausoleum suffered severe damage in this active seismic zone. Surviving masonry walls are indicated by red outlines, while two sketches show fragments of the dome. 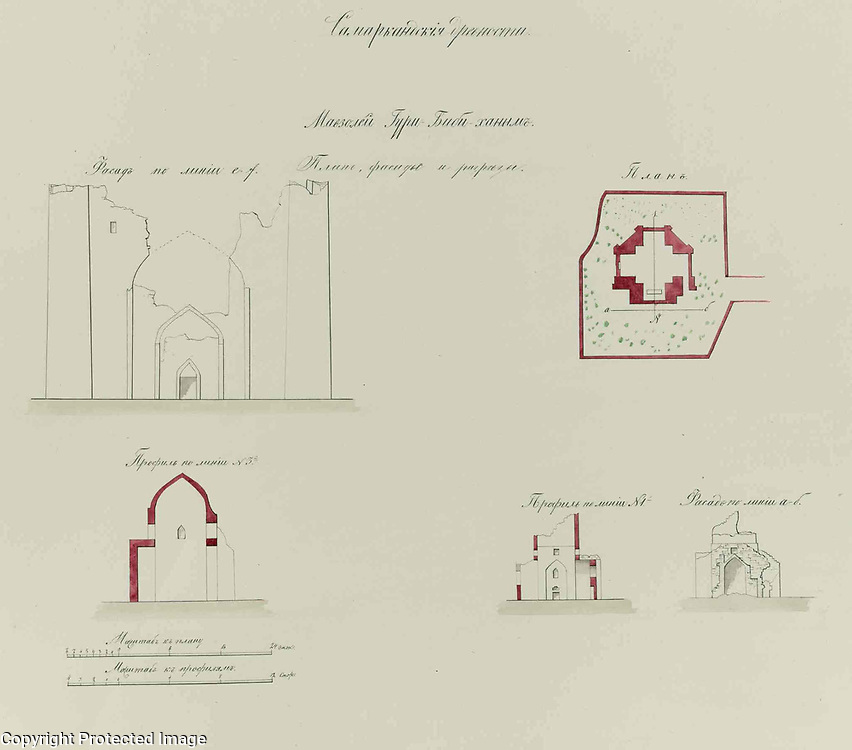