Syr-Darya Oblast. Ruins of the Grave of the Kyrgyz Saint, Khor-Kut, Near Fort No. 2

1865
This photograph of the ruined shrine at the grave of the Kyrgyz saint Khor-Kut is from the archeological part of Turkestan Album. The six-volume photographic survey was produced in 1871-72 under the patronage of General Konstantin P. von Kaufman, the first governor-general (1867-82) of Turkestan, as the Russian Empire’s Central Asian territories were called. The caption notes that the photograph was taken near Fort No. 2 in Syr-Darya Province of Russian Turkestan, part of present-day Kazakhstan. Named after the area’s main river, the province was created when the Turkestan governor-generalship was established in 1867. The fort was situated on a high bluff of the right bank of the Syr-Darya (visible on the right) and formed part of a chain of Russian fortifications built along this strategic river, which flows into the Aral Sea. The river was known to the ancient Greeks as the Jaxartes. The construction of shrines at the graves of revered religious figures was a widespread practice in Central Asia. In some cases the shrine could be a large mausoleum (mazar) or a pilgrimage ensemble (khanaka). The ruined walls in this view are of sun-dried (adobe) brick. Despite the arid climate, over time, walls made of this material erode back into the earth. The figures standing at the ruins give a sense of scale within this vast space. 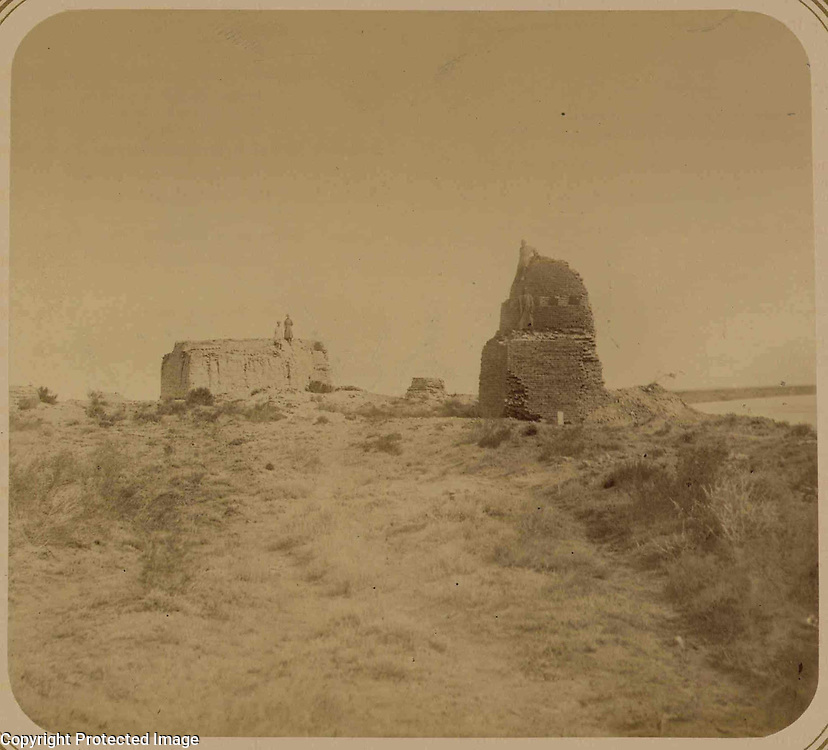