1905
The Russians developed an irrigation scheme to make Golodnaia Steppe (“Hungry Steppe”) in Turkestan a productive area for raising cotton and wheat. Despite such projects, life adhered to ancient traditions for most of the local ethnic groups. This photograph shows a camel driver in a tattered cloak leading a small caravan in the midst of the vast steppe grasslands. The camels are carrying cut thorn bushes for fodder. The severe continental climate—cold in the winter and extreme arid heat in the summer—made camels the primary beast of burden in this area. In front of the lead camel is a boy (perhaps the man’s son) bundled in a quilted jacket and riding a donkey. The image is by Russian photographer Sergei Mikhailovich Prokudin-Gorskii (1863–1944), who used a special color photography process to create a visual record of the Russian Empire in the early 20th century. Some of Prokudin-Gorskii’s photographs date from about 1905, but the bulk of his work is from between 1909 and 1915, when, with the support of Tsar Nicholas II and the Ministry of Transportation, he undertook extended trips through many different parts of the empire. In 1911 he made two trips to an area of Central Asia then known as Turkestan (present-day Uzbekistan and neighboring states), where he photographed Islamic architectural monuments as well as Russian development of the area.
Photo: Sergei Mikhailovich Prokudin-Gorskii. 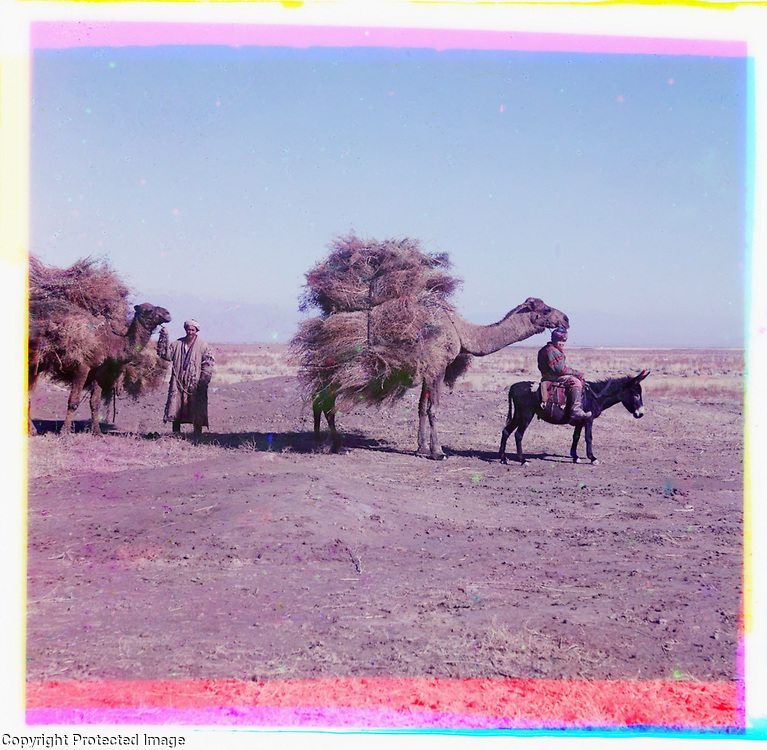