Antiquities of Samarkand. Tomb of the Saint Kusam-ibn-Abbas (Shah-i Zindah) and Adjacent Mausoleums. Mausoleum of Sha Arap. Section of Detail on the Side of the Front Niche

1865
This photograph of a decorative panel from an unidentified mausoleum in the northern cluster of shrines at the Shah-i Zindah necropolis (Samarkand, Uzbekistan) is from the archeological part of Turkestan Album. The six-volume photographic survey was produced in 1871-72, under the patronage of General Konstantin P. von Kaufman, the first governor-general (1867-82) of Turkestan, as the Russian Empire's Central Asian territories were called. The album devotes special attention to Samarkand’s Islamic architecture, such as 14th- and 15th-century monuments from the reign of Timur (Tamerlane) and his successors. Of particular note is Shah-i Zindah (Persian for “living king”), built on the elevated site of an ancient settlement known as Afrosiab and revered as a memorial to Kusam-ibn-Abbas, a cousin of the Prophet Muhammad. Although the patron of this mausoleum has not been conclusively identified, its date of construction is known to be 1360-61. Despite significant damage, the mausoleum facade is distinguished by a vibrant array of polychrome ceramic ornamentation that displays floral, geometric, and inscriptional patterns. This carved terracotta panel is located above the entrance set within the facade arch, or peshtak. The panel centers on an intricate pattern of block Kufic letters, which is flanked by remarkable secondary panels composed of floral and tendril motifs. 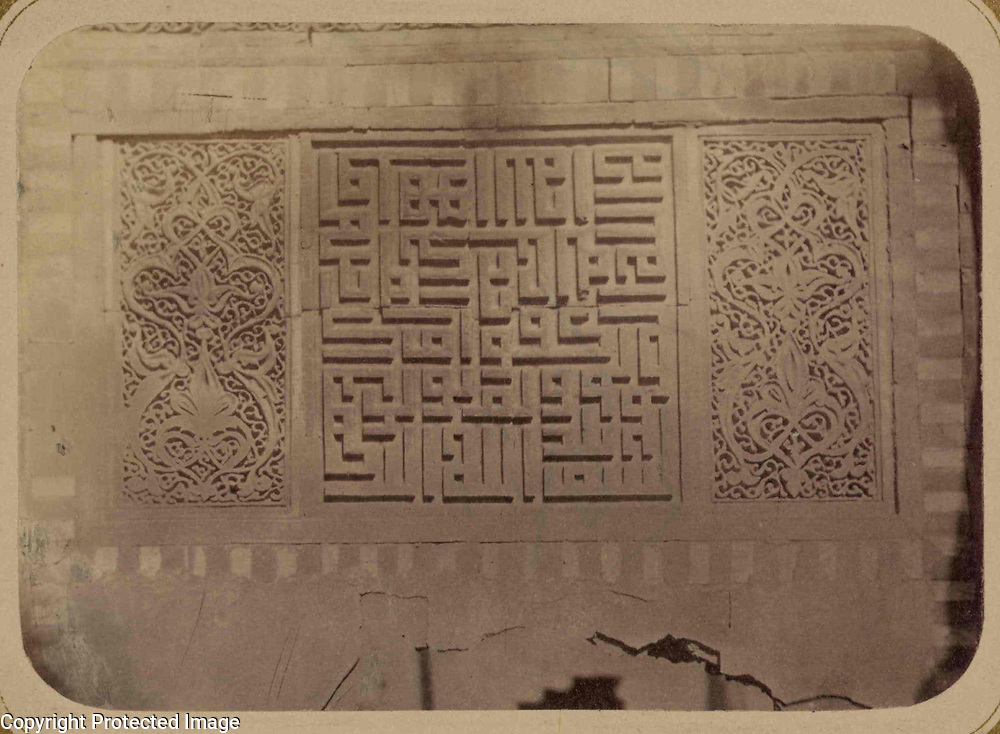