Syr-Darya Oblast. Ruins of the City of Sauran. Taken in 1871

1871
This photograph of the ruined walls of the city of Sauran, located in the southern part of present-day Kazakhstan, is from the archeological part of Turkestan Album. The six-volume photographic survey was produced in 1871-72 under the patronage of General Konstantin P. von Kaufman, the first governor-general (1867-82) of Turkestan, as the Russian Empire’s Central Asian territories were called. The caption notes that the photograph was taken in 1871, when the area was part of the Syr-Darya Province, named after the Syr-Darya River. Sauran (also known as Savran) was some 40 kilometers from the city of Yasi (present-day Turkestan, Kazakhstan), and was reputed to be an important point on the Silk Road. In the 14th century it became the capital of the regional Ak Orda (White Horde), and at the time was known for its ceramic tile production. (Ak means “white” and, in the traditional Turkic naming of cardinal compass points, corresponds to “south”; the other cardinal directions are Kok, meaning “blue” or “east”; Qizil, “red” or “west"; and Qara, “black” or “north.”) The enormous ruined walls in this view rise from the surrounding plains, which were extensively irrigated when the city was inhabited. The moist earth provided an ample supply of building material that was shaped with a technique known as pakhsa (rammed earth), which compresses damp soil mixed with clay and gravel into durable blocks. Despite the dry climate, the walls over time eroded back into the earth. A sense of the vast space is conveyed by the horse-drawn vehicles (including a kibitka, or hooded cart) and figures in the foreground. 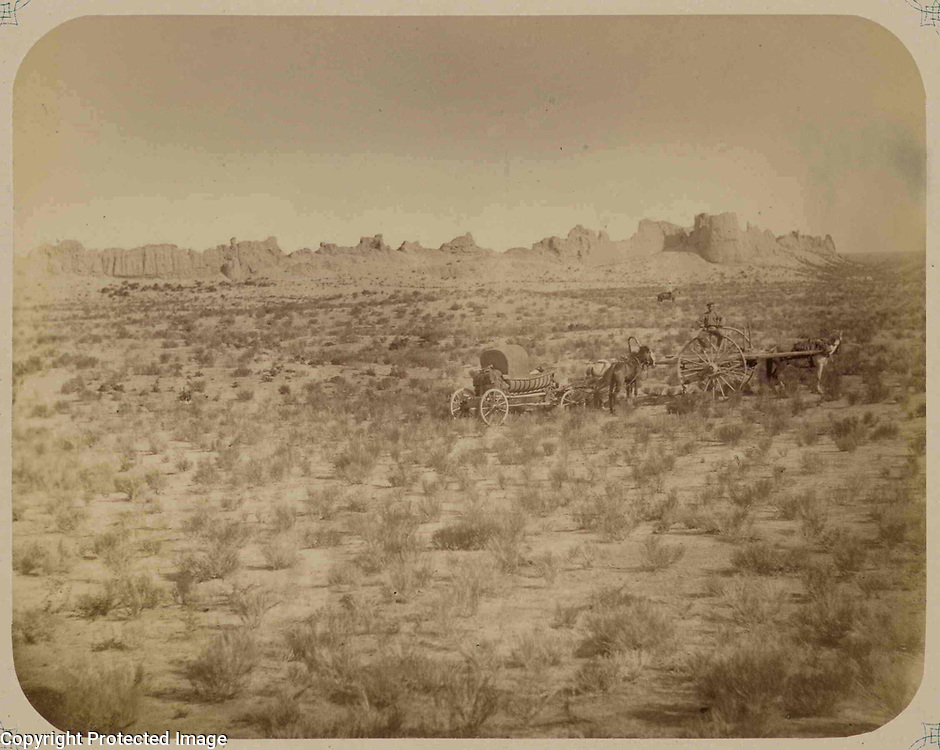