1865
This photograph of the ruins of the Kok-Gumbaz Madrasah in Ura-Tyube (present-day Istarawshan, Tajikistan) is from the archeological part of Turkestan Album. The six-volume photographic survey was produced in 1871–72 under the patronage of General Konstantin P. von Kaufman, the first governor-general (1867–82) of Turkestan, as the Russian Empire’s Central Asian territories were called. Ura-Tyube (in Tajik, Ura-Teppa) is one of the oldest settlements in Central Asia. Located near the Syr Darya River some 80 kilometers southwest of Khujand, Ura-Tyube flourished under the Timurid dynasty in the late 14th and 15th centuries. A major monument from the Timurid period is Kok-Gumbaz, which served as both a mosque and a madrasah (religious school). It was apparently built by ‘Abd al-Latif (circa 1420-50), the eldest son of the astronomer king Ulugh Beg and great-grandson of the conqueror Timur (Tamerlane). Its name refers to an original light blue dome, destroyed with much of the structure from earthquakes in this seismically active area. The structural core is still visible, as are fragments of the intricate ceramic work. The facade of the iwan arch (the main entrance) is decorated with panels of polychrome tiles, including majolica work. The drum that supported the dome has remnants of a monumental inscription that formed part of the ceramic decoration. 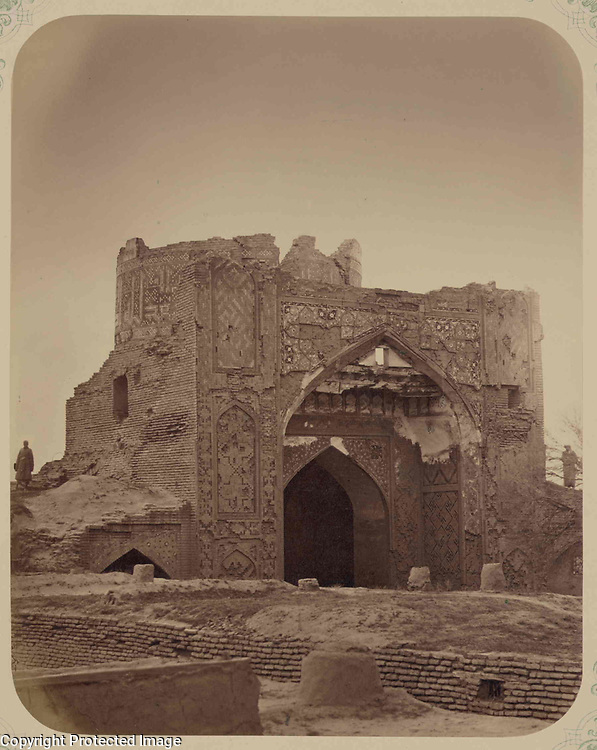