View of Samarkand from Tillia Kari

1905
In the center of Samarkand is the Registan complex, consisting of three madrasah (religious schools). The third of these, the Tillia Kari Madrasah, was built in 1646–60 on the site of a former caravansarai. Its plan is formed by a rectangular courtyard, bounded by arcades that contain rooms for scholars. This view, taken from the two-story main facade, looks in the opposite direction from the square toward the adobe houses in the city. On the left is one of the four iwan arches that define the main axes of the courtyard. Another is visible from the side on the far right. Despite losses in this active seismic zone, the facades display profuse ceramic decoration that includes geometric and botanical motifs, as well as vertical Perso-Arabic inscription bands on either side of the iwan arch. The image is by Russian photographer Sergei Mikhailovich Prokudin-Gorskii (1863–1944), who used a special color photography process to create a visual record of the Russian Empire in the early 20th century. Some of Prokudin-Gorskii’s photographs date from about 1905, but the bulk of his work is from between 1909 and 1915, when, with the support of Tsar Nicholas II and the Ministry of Transportation, he undertook extended trips through many different parts of the empire. During a trip in 1911 he gave special attention to the Islamic architecture of Samarkand (present-day Uzbekistan). 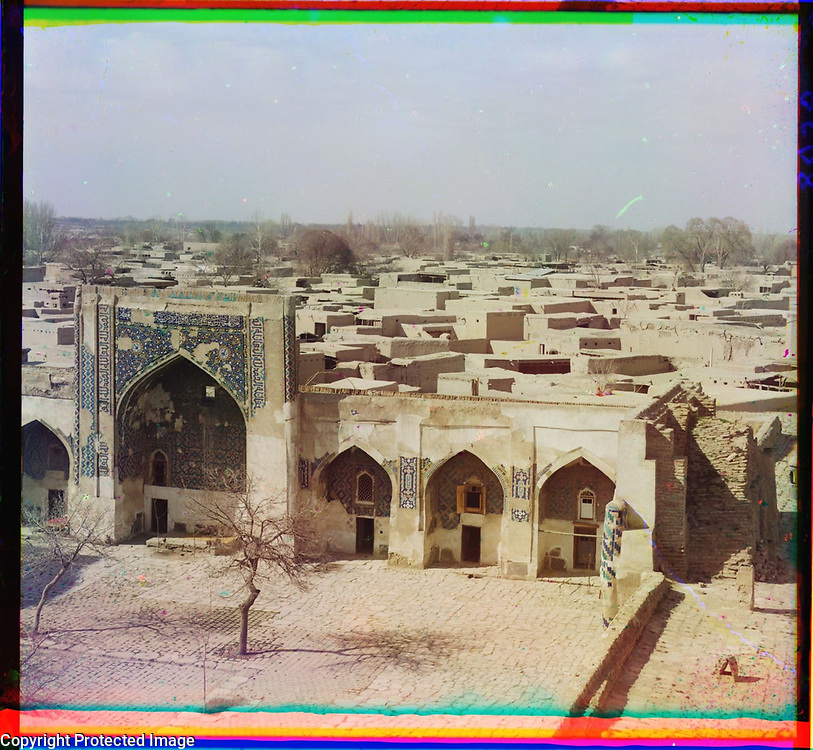