1868
This photograph of the main façade of the Kukeldash Madrasah in Tashkent (present-day Uzbekistan) is from the archeological part of Turkestan Album. The six-volume photographic survey was produced in 1871–72 under the patronage of General Konstantin P. von Kaufman, the first governor-general (1867–82) of Turkestan, as the Russian Empire’s Central Asian territories were called. The Kukeldash Madrasah (religious school) was built in the city center in 1551–75. During this period Tashkent was part of the Khanate of Bukhara, which achieved architectural brilliance under the 16th-century Shaybanid dynasty. Barak Khan was presumably a vizier (high official) in the khanate. This two-storied structure contained arched cells for living and study and was square in plan, with a large interior courtyard. The main entrance was framed by a monumental iwan (vaulted hall, walled on three sides, with one end open) arch. The madrasah is surrounded by squalid hovels for humans and animals, but this view shows remnants of the beautiful original ceramic decoration on the iwan facade. In 1809 Tashkent was seized by the Khanate of Kokand, under whose control it remained until it was taken by the Russians in 1865. Tashkent then became capital of Turkestan. In the 1950s the main façade of the Kukeldash Madrasah was the object of major restoration work. Visible on the far right is the central dome of the Djami Mosque, which suffered severe earthquake damage in 1868. 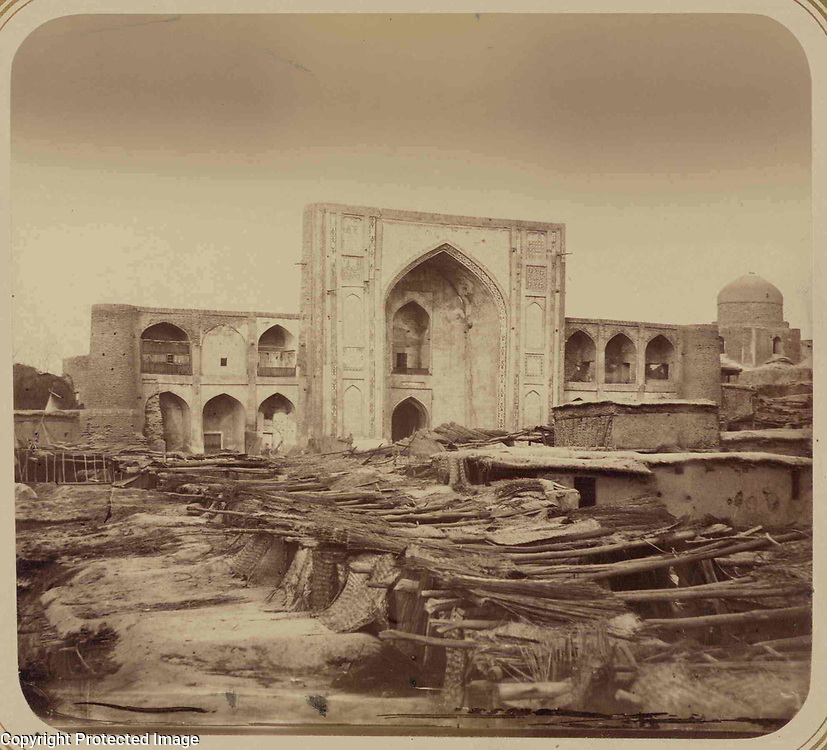