Drawings on Tiles above Gates into the Tsar's Tomb. Bogoeddin. Bukhara

1905
Shown here are ceramic panels above the entrance to the tomb of Sheikh Bakhauddin Nakshbandi (1318–89), venerated sage and leader of the Sufi Nakshbandi order. In 1544 Bakhauddin’s burial site at Baha al-Din, near Bukhara (in present-day Uzbekistan), was enshrined within a large khanaka (memorial structure) built by the Sheibanid ruler Abd al-Aziz khan. Although much damaged over the centuries, the facade retained fragments of exquisite ceramic work, including glazed carved terra-cotta tiles (at top) with intricate floral motifs. Above the pointed arch of the portal are faience tiles that compose a complex design of intertwined tendrils centered on a 12-lobed floral figure. The interior of the arch shows decorative vaulting in the mocárabe form. The image is by Russian photographer Sergei Mikhailovich Prokudin-Gorskii (1863–1944), who used a special color photography process to create a visual record of the Russian Empire in the early 20th century. Some of Prokudin-Gorskii’s photographs date from about 1905, but the bulk of his work is from between 1909 and 1915, when, with the support of Tsar Nicholas II and the Ministry of Transportation, he undertook extended trips through many different parts of the empire. Prokudin-Gorskii was interested in recently acquired territories of the Russian Empire such as Turkestan, which he visited on a number of occasions, including trips in 1907 and 1911 to the ancient city of Bukhara. 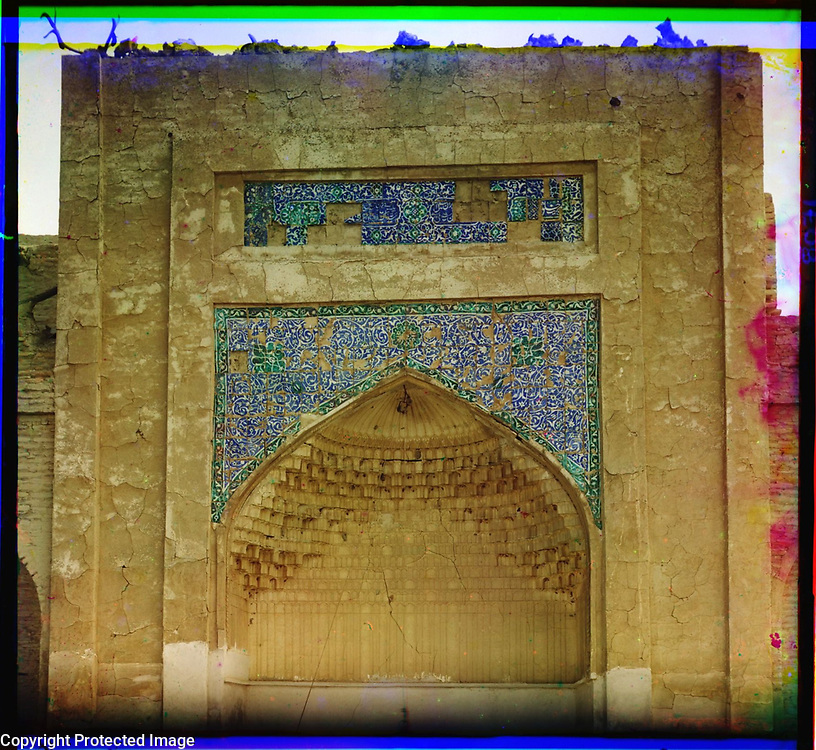