1905
Seen here is a Sart cemetery in the steppe near the Syr-Darya River (just visible in the right background). “Sart” was a term with various ethnic meanings in the late 19th century, and was often used to refer to inhabitants of this area before the coming of Uzbek tribes in the 16th century. The burial mounds were a widespread practice not only in the country but also in cities such as Samarkand. On the right the burial place of a venerated sage is marked by a mazar (ancient shrine) covered in a protective layer of mud. Next to the shrine is sacred burial marker. In the distance is the Turkestan Range. The image is by Russian photographer Sergei Mikhailovich Prokudin-Gorskii (1863–1944), who used a special color photography process to create a visual record of the Russian Empire in the early 20th century. Some of Prokudin-Gorskii’s photographs date from about 1905, but the bulk of his work is from between 1909 and 1915, when, with the support of Tsar Nicholas II and the Ministry of Transportation, he undertook extended trips through many different parts of the empire. In 1911 he made two trips to an area of Central Asia then known as Turkestan (present-day Uzbekistan and neighboring states), where he photographed Islamic architectural monuments as well as Russian development projects, such as an irrigation scheme to make Golodnaia Steppe (“Hungry Steppe”) a productive area for raising cotton and wheat. 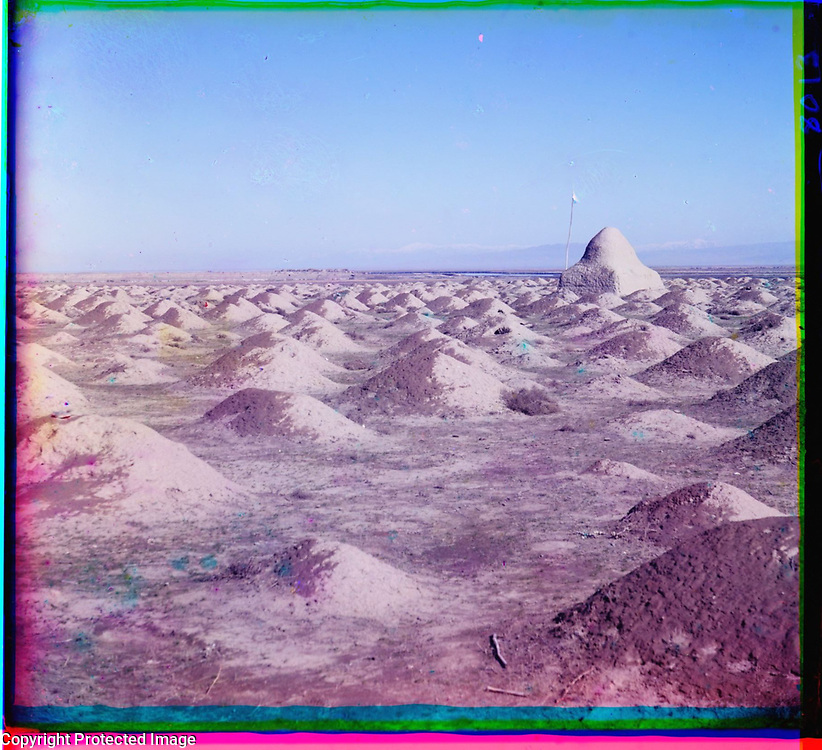