Antiquities of Samarkand. Inner Courtyard of the Shir Dar Madrasah. Inscriptions around the Inner Niche and Its Upper Sections. Center

1868
This photograph of the interior courtyard of the Shir Dar Madrasah in Samarkand (Uzbekistan) is from the archeological part of Turkestan Album. The six-volume photographic survey was produced in 1871-72 under the patronage of General Konstantin P. von Kaufman, the first governor-general (1867-82) of Turkestan, as the Russian Empire’s Central Asian territories were called. The album devotes special attention to Samarkand’s Islamic architecture, such as 14th- and 15th-century monuments from the reign of Timur (Tamerlane) and his successors. In the center of Samarkand is the Registan ensemble, composed of three major examples of a madrasah (religious school). The second madrasah in the ensemble, the Shir Dar, was built in 1619-36, during the Astrakhanid dynasty. Despite significant damage over the centuries, it remains one of the most lavishly ornamented monuments in Central Asia. The form of this madrasah consists of a rectangular courtyard enclosed by a two-story arcade with an iwan (vaulted hall, walled on three sides, with one end open) and a mosque on the eastern side. This view shows the east wall niche, with the lattice work of a window on the second level. The niche is covered with elaborate ceramic work composed of polychrome tiles in geometric and botanical patterns. The pointed window arch is framed by an inscription band in the Thuluth cursive style. Visible at the top are the “stalactite” decorative elements of the arch vault. 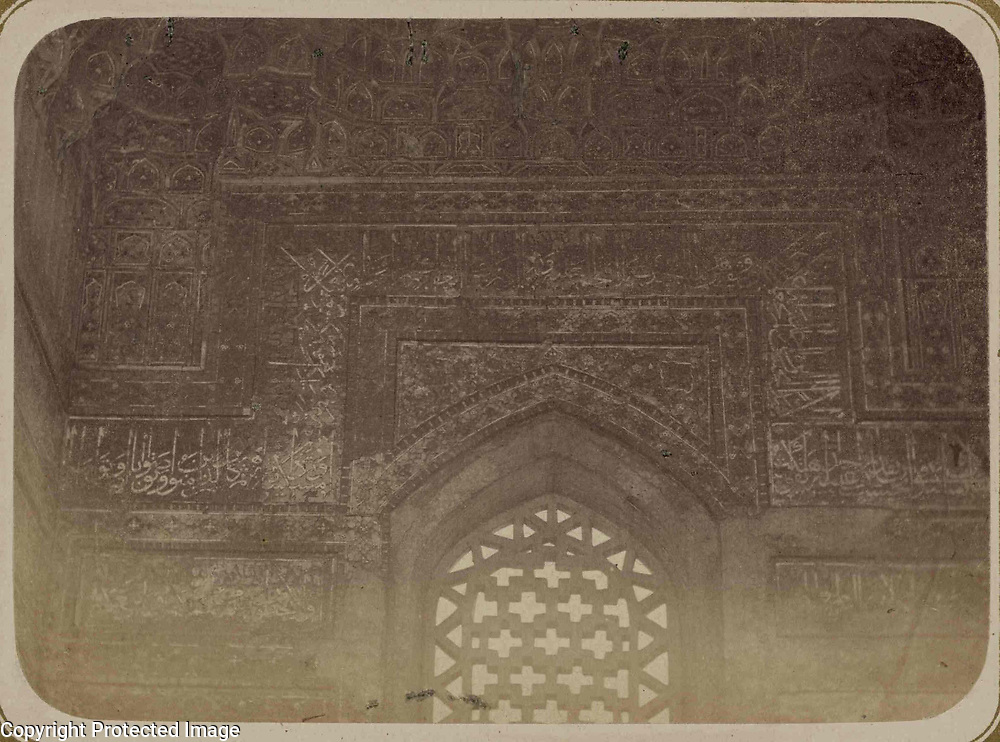