Antiquities of Samarkand. Tomb of Saint Kusam-ibn-Abbas (Shah-i Zindah) and Adjacent Mausoleums. Front of the Entry Niche, Arches from Outside

1865
This view of the main entrance portal (darvozakhana) of the Shah-i Zindah necropolis in Samarkand is from the archeological part of Turkestan Album. The lavish edition in six volumes was produced in 1871-72 under the patronage of General Konstantin P. von Kaufman, the first governor-general, in 1867-82, of Turkestan, as the Russian Empire’s Central Asian territories were called. The primary compilers for the visual material were Aleksandr L. Kun, an Orientalist attached to the army, and Nikolai V. Bogaevskii, a military engineer. They devoted special attention to Samarkand’s Islamic architecture, including 14th- and 15th-century monuments from the reign of Tamerlane and his successors (the Timurids). Among the accomplishments of this period is a collection of mausoleums known as Shah-i Zindah (Persian for “living king”). Built on an ancient burial ground, the necropolis is revered as a memorial to Kusam-ibn-Abbas, a cousin of the Prophet Muhammad. This photograph shows the entrance, framed by a portal decorated with ceramic tile and built in 1434-35 by Ulugh Beg, the renowned astronomer king and grandson of Tamerlane. The entrance contains a square chamber, or chartak, from which steps (visible through the arch) lead to the first group of mausoleums. This view shows the severe effects of neglect and damage. (Samarkand is located in an active seismic zone.) 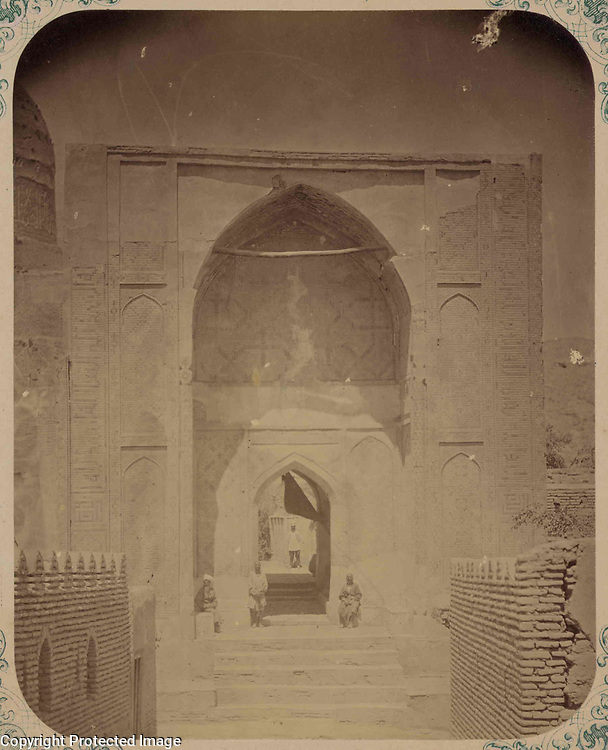