Antiquities of Samarkand. Madrasah of Tillia Kari. Inner Courtyard (Western Side). Section of a Column (Pillar)

1868
This photograph of a facade detail in the courtyard of the Tillia Kari Madrasah in Samarkand (Uzbekistan) is from the archeological part of Turkestan Album. The six-volume photographic survey was produced in 1871-72 under the patronage of General Konstantin P. von Kaufman, the first governor-general (1867-82) of Turkestan, as the Russian Empire’s Central Asian territories were called. The album devotes special attention to Samarkand’s Islamic architecture, such as 14th- and 15th-century monuments from the reign of Timur (Tamerlane) and his successors. In the center of Samarkand is the Registan ensemble, composed of three major examples of a madrasah (religious school). The third Registan component, the Tillia Kari Madrasah, was built in 1646-60 on the site of a former caravanserai. The ceramic column shown here is at the corner of a niche in the courtyard side of the west wall. The column’s intricate decorative pattern is a composite of polychrome glazed tiles containing geometric and botanical motifs. The column is flanked by vertical strips with a lozenge pattern, a strip of monochrome tiles, and another strip with floral motifs framed by intersecting geometric forms. The color range includes dark blue, light blue, orange, yellow, and white. Such detailed photographic documentation reflects a methodical approach to the study of these Islamic monuments. 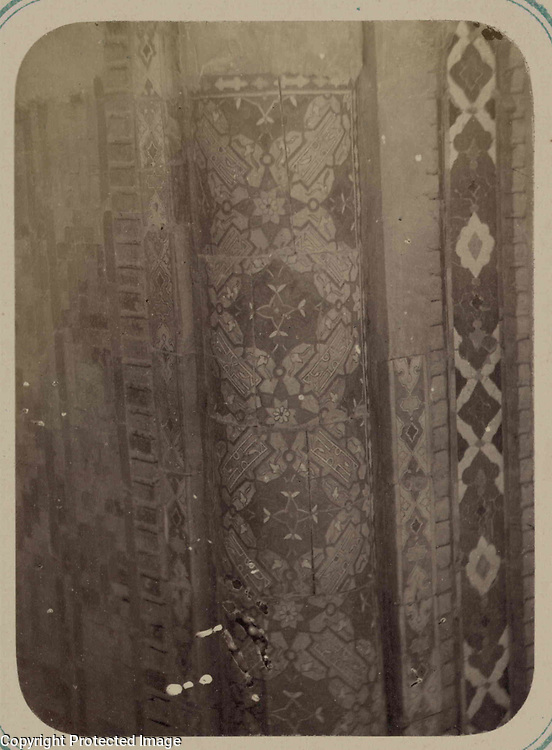