1905
The Kalyan Minaret, some 50 meters in height, dominates Bukhara’s historic center. The minaret is part of a complex known as the Poi-Kalian (“footrest of the Great One”) that contains the city’s main mosque and the Miri-Arab madrasah. Completed in 1127, during the reign of Arslankhan, the minaret ascends in bands of ornamented brick courses, some of which show traces of blue ceramic glaze. The structure tapers sharply from a massive base to the lantern, with its 16 window niches. At the top is a large, well preserved “stalactite” cornice. This photograph was taken from an alley in the market district beyond the Poi-Kalian walls. Turbaned figures peer from the doorway of an adobe dwelling. The image is by Russian photographer Sergei Mikhailovich Prokudin-Gorskii (1863–1944), who used a special color photography process to create a visual record of the Russian Empire in the early 20th century. Some of Prokudin-Gorskii’s photographs date from about 1905, but the bulk of his work is from between 1909 and 1915, when, with the support of Tsar Nicholas II and the Ministry of Transportation, he undertook extended trips through many different parts of the empire. In 1911 his travels took him to an area of Central Asia then known as Turkestan (present-day Uzbekistan and neighboring states), where he photographed many of the ancient monuments of Bukhara. 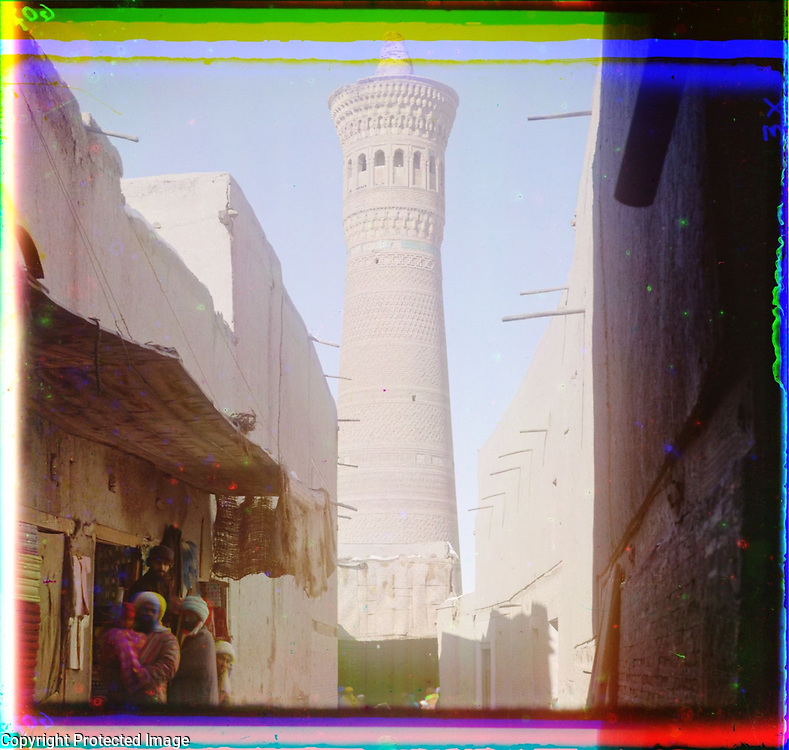