1865
This sketch of the interior of the Kusam-ibn-Abbas Mausoleum in the northern cluster of shrines at the Shah-i Zindah necropolis in Samarkand is from the archeological part of Turkestan Album. The six-volume photographic survey was produced in 1871-72, under the patronage of General Konstantin P. von Kaufman, the first governor-general (1867-82) of Turkestan, as the Russian Empire's Central Asian territories were called. The album devotes special attention to Samarkand’s Islamic architecture, such as 14th- and 15th-century monuments from the reign of Timur (Tamerlane) and his successors. The Shah-i Zindah (Persian for “living king”) ensemble is revered as a memorial to Kusam-ibn-Abbas, a cousin of the Prophet Muhammad. He is considered by believers to be buried at this site after being killed in an Arab attack in 673. (Samarkand was not, in fact, occupied by the Arabs until 712, and resistance to their rule continued for several decades.) The gurkhana, or sepulcher, is believed to contain the tomb of the saint, and parts of the structure seem to date from the 12th century. Because of limited light and the sacred nature of the space, photography was not feasible. The sketch gives faint outlines of the walls, with their blind arcading, while the sarcophagus is covered with cloth mantles. The sketch is signed by the artist, L.A. Shostak. 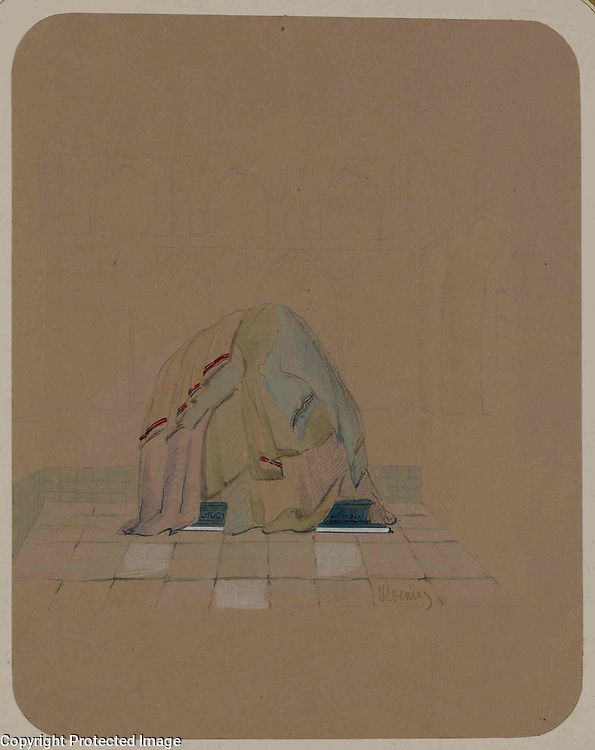