Antiquities of Samarkand. Madrasah of Shaybani Khan and Tomb of Kuchkunji Khan. Plans, Elevations, and Sections

1868
This plan, section and elevation of the Madrasah of Shaybani Khan in Samarkand (Uzbekistan) is from the archeological part of Turkestan Album. The six-volume photographic survey was produced in 1871-72 under the patronage of General Konstantin P. von Kaufman, the first governor-general (1867-82) of Turkestan, as the Russian Empire’s Central Asian territories were called. The album devotes special attention to Samarkand’s Islamic architectural heritage. Muhammad Shaybani, subsequently known as Shaybani Khan (1451-1510), was a descendant of Genghis Khan and the founder of the short-lived Shaybanid Uzbek dynasty. In 1500, and again in 1505, he captured Samarkand from the Timurid ruler Babur, who subsequently established the Mughal Empire. In 1510 Shaybani Khan was killed in the battle of Merv with the Persian Shah Ismail I. His headless body was returned to Samarkand for burial, and a madrasah, or religious school, was founded in his honor. The plan and elevation show an extensive courtyard enclosed on three sides by a one-story cloister of cells (khujras) for scholars. The entrance to the courtyard is marked by a separate portal structure (at bottom). On the right of this page is a plan, section and elevation of the mausoleum of Kuchkunji Khan, nephew of Shaybani Khan and his successor. By the time this sketch was made, the mausoleum had long been in a ruined state. 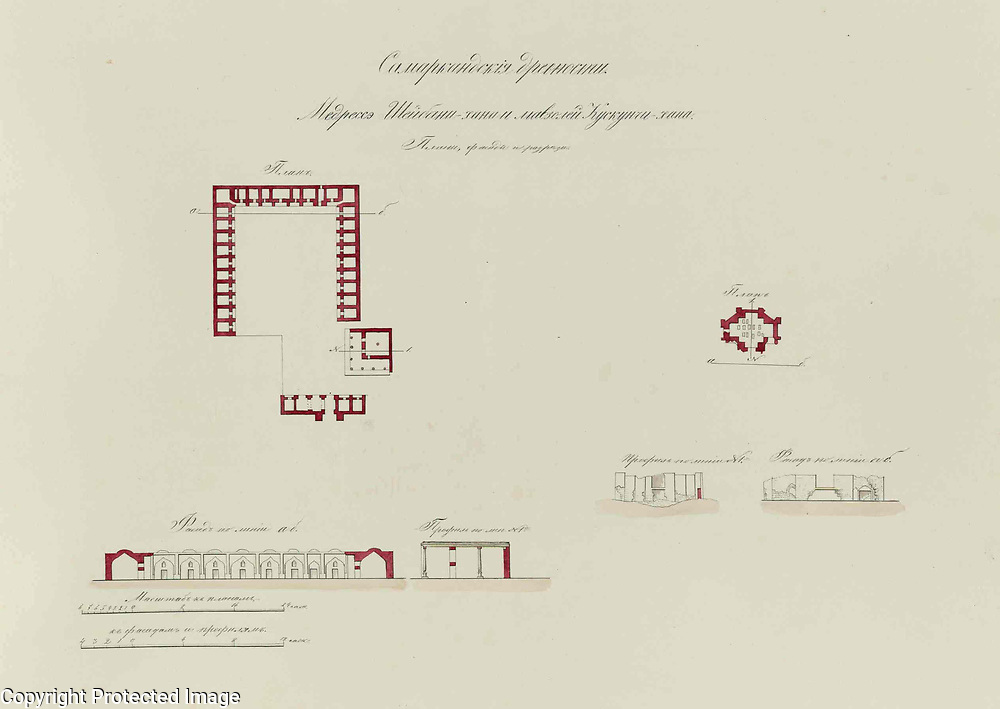