Antiquities of Samarkand. Tomb of Saint Kusam-ibn-Abbas (Shah-i Zindah) and Adjacent Mausoleums. Mausoleum of Emir Kutuluk Turdi Bek Aka. Detail of Niche Panel on the External Arch (Above)

1865
This photograph of the Shadi Mulk mausoleum at the Kusam-ibn-Abbas necropolis in Samarkand is from the archeological part of Turkestan Album. The six-volume photographic survey was produced in 1871-72 under the patronage of General Konstantin P. von Kaufman, the first governor-general, in 1867-82, of Turkestan, as the Russian Empire’s Central Asian territories were called. The primary compilers for the visual material were Aleksandr L. Kun, an Orientalist attached to the army, and Nikolai V. Bogaevskii, a military engineer. They devoted special attention to Samarkand’s Islamic architecture, such as 14th- and 15th-century monuments from the reign of Tamerlane and his successors. Built on the site of an ancient settlement known as Afrosiab, Shah-i Zindah (Persian for “living king”) is revered as a memorial to Kusam-ibn-Abbas, a cousin of the prophet Muhammad. The mausoleum of Shadi Mulk Aka was built in 1372 for the burial of Uldjai Shadi-Mulk, the daughter of Tamerlane's elder sister, Kutlug-Turkan-Aka. This view shows a fragment of the main facade arch niche, whose ceramic ornamentation includes polychrome majolica tiles, faience mosaics, patterned Arabic script in the cursive Thuluth form, carved terracotta columns, and the “honey-comb” (mocárabe) form at the top of the niche. The basic colors are dark blue and turquoise. 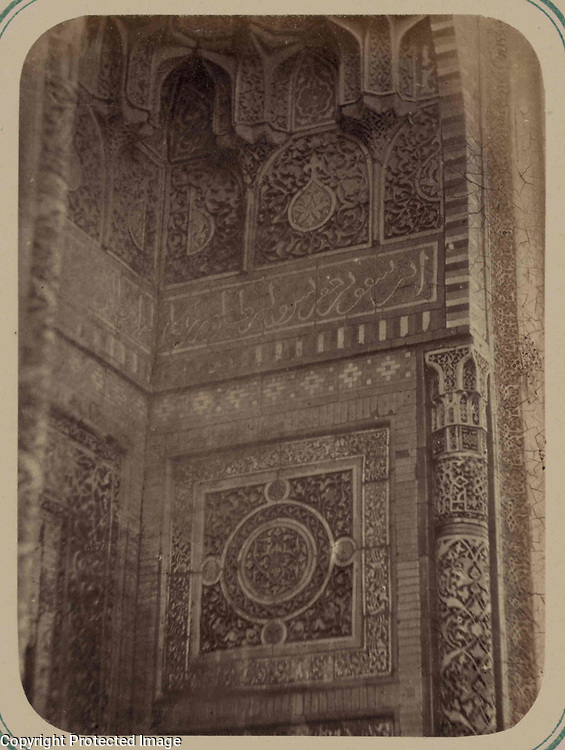