Antiquities of Samarkand. Tomb of the Saint Kusam-ibn-Abbas (Shah-i Zindah) and Adjacent Mausoleums. Mausoleum of Tamerlane's Daughter, Toglu Tekin. View of the Front

1865
This photograph of the facade of the Toglu Tekin (Emir Hussein) Mausoleum at the Shah-i Zindah necropolis in Samarkand is from the archeological part of Turkestan Album. The six-volume photographic survey was produced in 1871-72, under the patronage of General Konstantin P. von Kaufman, the first governor-general (1867-82) of Turkestan, as the Russian Empire's Central Asian territories were called. The album devotes special attention to Samarkand’s Islamic architecture, such as 14th- and 15th-century monuments from the reign of Timur (Tamerlane) and his successors. Shah-i Zindah (Persian for “living king”) is revered as a memorial to Kusam-ibn-Abbas, a cousin of the Prophet Muhammad. In 1386 Emir Hussein (one of Timur’s grandees) built a mausoleum for his mother, Toglu Tekin. This photograph, taken behind a parapet that partly obscures the view, shows the upper part of the main facade, with its entrance arch, or peshtak. Despite severe damage from natural causes, most of the facade and much of its rich ceramic decoration survived. The display of polychrome ornament includes glazed carved terracotta columns at the corners of the arch, vertical strips of majolica tiles in elaborate geometric patterns, and Arabic inscription bands in cursive Thuluth script set within intricate floral strapwork. A turbaned figure casts a watchful eye on the photographer. 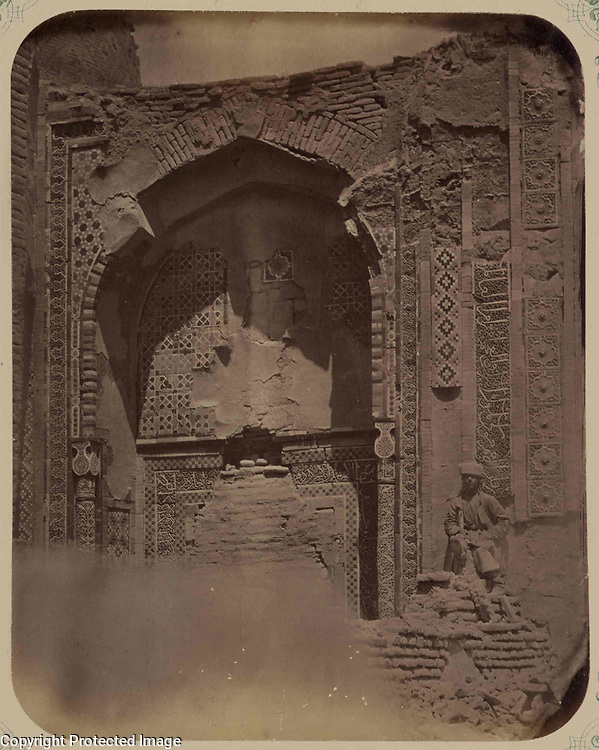