1905
Built on the site of an ancient settlement known as Afrosiab, Shah-i Zinda (Persian for “living king”) is revered as a memorial to Kussam ibn Abbas, a nephew of the Prophet Muhammad. The Emir-Zade Mausoleum was built in 1386 by a member of the court of Timur (Tamerlane). Despite losses to its polychrome ornament, the facade remains an important example of Central Asian decorative art. The peshtak (entrance arch) contains a variety of ceramic tiles (including majolica), as well as glazed carved terra-cotta and mosaic work. In addition to geometric designs and eight-lobed rosettes, the flanks of the arch contain panels with patterns formed of block Kufic script. The image is by Russian photographer Sergei Mikhailovich Prokudin-Gorskii (1863–1944), who used a special color photography process to create a visual record of the Russian Empire in the early 20th century. Some of Prokudin-Gorskii’s photographs date from about 1905, but the bulk of his work is from between 1909 and 1915, when, with the support of Tsar Nicholas II and the Ministry of Transportation, he undertook extended trips through many different parts of the empire. In 1911 his travels took him to an area of Central Asia then known as Turkestan (present-day Uzbekistan and neighboring states), where he photographed Samarkand’s Islamic architecture, including 14th and 15th century monuments from the reign of Timur and his successors. 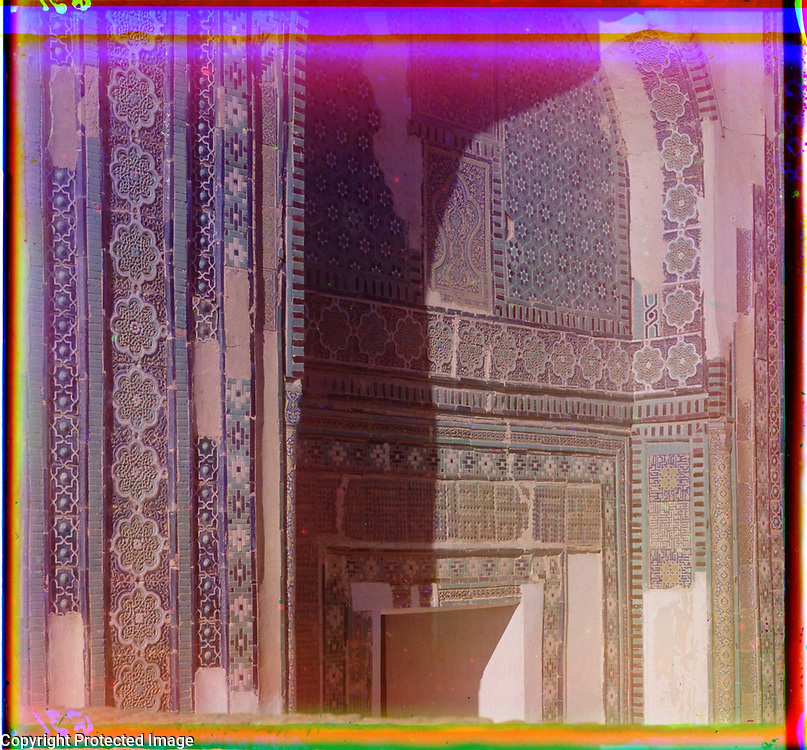