Antiquities of Samarkand. Mausoleums of Rukhabad and Ak Sarai. Plans, Facades, and Sections

1868
These plans, elevations and sections of two mausoleums in Samarkand (Uzbekistan) are from the archeological part of Turkestan Album. The six-volume photographic survey was produced in 1871-72 under the patronage of General Konstantin P. von Kaufman, the first governor-general (1867-82) of Turkestan, as the Russian Empire’s Central Asian territories were called. The album devotes special attention to Samarkand’s Islamic architectural heritage. On the left is the site plan of the mausoleum known as Rukhabad (“dwelling of the soul”), a centralized domed structure located near the Timurid mausoleum Gur-Emir and probably built in the 1380s for the sage and mystic Sheikh Burkhaneddin Sagardzhi, who was revered by Timur (Tamerlane). The main entrance of Rukhabad faced a large courtyard enclosed by a cloister. The plan also indicates two square pools. Below the plan are an elevation and section, with primary masonry walls marked in red. On the right is the more modest Ak Sarai mausoleum, built in the 1470s at the command of the Timurid ruler Abu Said to supplement Gur-Emir as a burial place for the dynasty’s male line. (Abu Said died around 1469 in battle with Turkmen forces in Azerbaijan.) Also a centralized structure, the partially damaged Ak Sarai lacked the imposing dome of Rukhabad. Nonetheless, its association with the Timurid dynasty endowed it with great significance. 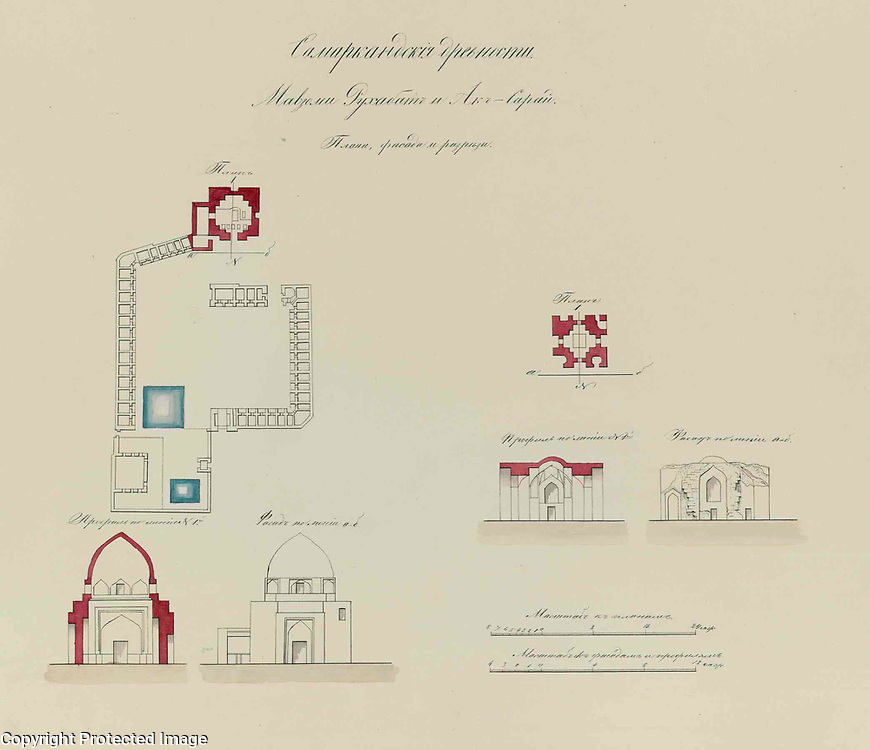