Antiquities of Samarkand. Tomb of the Emir Timur Kuragan (Gur-Emir). One of the Doors

1868
This sketch of a door at the Gur-Emir mausoleum in Samarkand (Uzbekistan) is from the archeological part of Turkestan Album. The six-volume photographic survey was produced in 1871-72 under the patronage of General Konstantin P. von Kaufman, the first governor-general (1867-82) of Turkestan, as the Russian Empire’s Central Asian territories were called. The album devotes special attention to Samarkand’s Islamic architectural heritage, including Gur-Emir (Persian for “tomb of the ruler”). Although known primarily as the burial place of Timur (Tamerlane), Gur-Emir was begun by Timur in 1403 to commemorate the death of his beloved grandson, Muhammad Sultan. His sudden death at the age of 27 deprived Timur of his chosen successor. The shrine was not yet completed at the time of Timur's own death from pneumonia in 1405. With his burial there, Gur-Emir became the Timurid mausoleum. This view of a wooden double door, probably within the iwan (vaulted hall, walled on three sides, with one end open) of the entrance arch, presents a detailed sketch of the right half. At the top is a square panel with intricate relief carving as a background for cursive Arabic letters. Beneath this panel is a carved design with intertwined foliate patterns in a flowing geometric arrangement. The bottom has another square panel with four astral forms at the corners. The panels are framed by a border with elaborate relief carving. 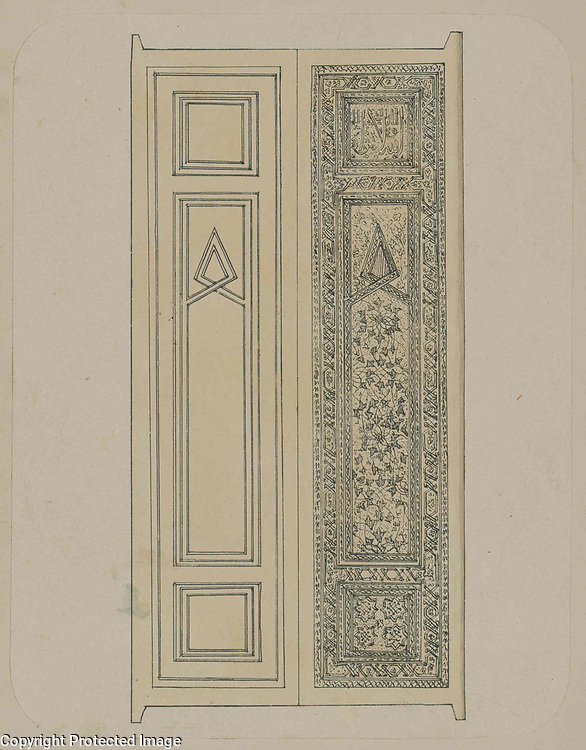