Antiquities of Samarkand. Madrasah of Tillia Kari. Inner Courtyard (Western Side). Base of Half of a Corner Column (Exterior)

1868
This photograph of a facade detail from the courtyard of the Tillia Kari Madrasah in Samarkand (Uzbekistan) is from the archeological part of Turkestan Album. The six-volume photographic survey was produced in 1871-72 under the patronage of General Konstantin P. von Kaufman, the first governor-general (1867-82) of Turkestan, as the Russian Empire’s Central Asian territories were called. The album devotes special attention to Samarkand’s Islamic architecture, such as 14th- and 15th-century monuments from the reign of Timur (Tamerlane) and his successors. In the center of Samarkand is the Registan ensemble, composed of three major examples of a madrasah (religious school). The third Registan component, the Tillia Kari Madrasah, was built in 1646-60 on the site of a former caravanserai. This view includes the base and part of a column attached to a facade corner on the west side of the inner courtyard. The complex base, column, and flanking panels are made of carved stone, possibly marble, which is used elsewhere in the medrese. After Tamerlane’s campaign in India (1399), marble appeared frequently in Samarkand structures, to which the material gave the lustre of monumentality. A carved inscription band rests above the receding rows of a “stalactite” form of dentilation on the panels and the column shaft. Other decorative figures have been obscured by stucco. 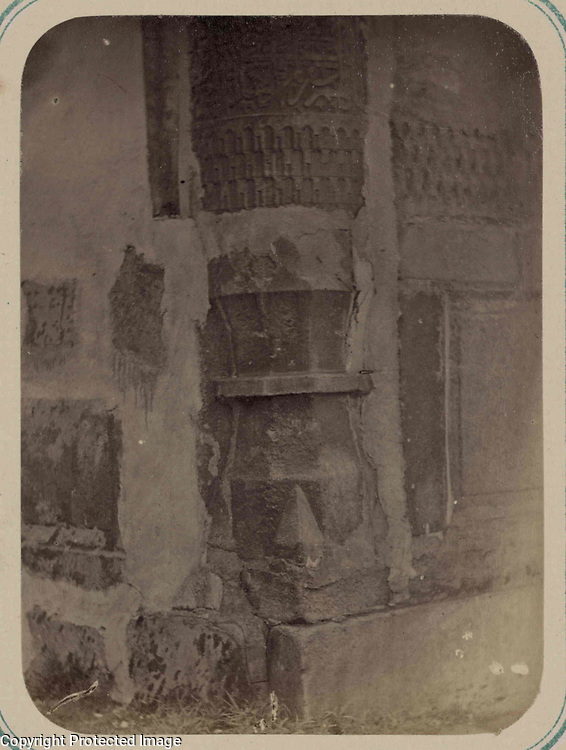