1905
Seen here is entrance to the grounds of the Namazga Mosque on the outskirts of Samarkand. The name refers to one of the most important forms of ritual worship in Islam—Namaz (in Persian)—or Salah (in Arabic). Although the mosque itself was rebuilt in the 1630s, the entrance structure was erected much later, probably in the late 19th century. The walls are of fired brick (rather than the traditional adobe), with two undecorated wooden doors. The flanking towers, resting on baroque pedestals, are covered with a repetitive tile pattern that, although colorful, lacks the subtlety and intricacy of earlier ceramic work in Samarkand. The image is by Russian photographer Sergei Mikhailovich Prokudin-Gorskii (1863–1944), who used a special color photography process to create a visual record of the Russian Empire in the early 20th century. Some of Prokudin-Gorskii’s photographs date from about 1905, but the bulk of his work is from between 1909 and 1915, when, with the support of Tsar Nicholas II and the Ministry of Transportation, he undertook extended trips through many different parts of the empire. Prokudin-Gorskii was particularly interested in recently acquired territories of the Russian Empire such as Turkestan (present-day Uzbekistan and neighboring states), which he visited on a number of occasions, including a trip in January 1907 that focused on the ancient cities of Bukhara and Samarkand. 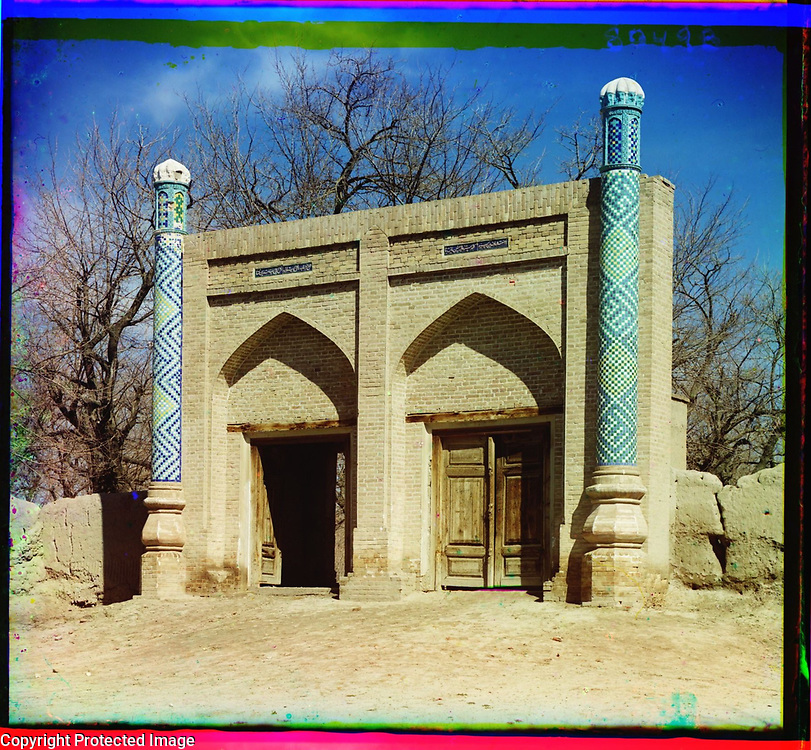